His Captive Mate by Samantha Madisen 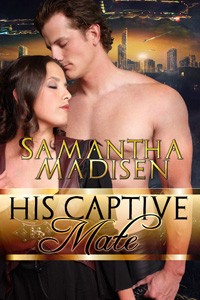 When her ship crashes on a foreign planet during her first hunting trip, Dazea shudders at the thought of being captured by the barbarians who inhabit this wild, primitive world, and her fears are soon realized when she is caught and taken captive by the ruggedly handsome Captain Hawk Agnon. His civilization turns out to be more technologically sophisticated than she had expected, but this only increases her shock when she finds out that Hawk plans to take her as his mate.

Among Hawk’s people, women obey or face the consequences, and Dazea soon learns the hard way that defying her future mate will result in a long, hard spanking on her bare bottom. To make matters worse, she discovers that a sore bottom is far from the most humiliating experience in her future, because when the time comes for Hawk to claim her, it will be done in public.

After a thorough, intimate examination proves her ready to be mated, her training begins. In spite of everything, with each firm punishment and each helpless climax the intense need Hawk’s dominance has kindled within her burns ever hotter. Soon enough she will be on display, naked and blushing, as her handsome, dominant mate publicly demonstrates his complete mastery of her body. But when that day comes, will she be able to resist the shame of begging for more?

She gasped and looked up at him, unable to believe he was being so forceful. There was not much time for her to consider it, though. She found herself being lifted into the air as he sat down where she had just been sitting, then placed over his knee, her ass sticking prominently in the air. He pressed on the small of her back with his palm and she found that no matter how she tried, she couldn’t move more than an inch in any direction.

“I’m not a cruel man, Daz,” Hawk rumbled over her, “but I won’t take this kind of childish insolence.”

The end of his sentence brought the full weight of his palm crashing down onto her ass and she yelped as the pain of it seared through her body. Ignoring her protest completely, Hawk’s hand lifted and fell, lifted and fell, alternating cheeks as he went.

Daz felt completely humiliated, as if she were a child that were being punished for some outburst. She couldn’t believe that a man was doing this to her. But to her surprise, the space between her legs began to feel inexplicably damp.

The pain of the spanking began to move from just the surface of her flesh, deeper under her skin. She felt the heat of his discipline rising now and, mingling with the sharp, searing smacks, it became almost too much to bear.

But Hawk seemed unaffected by her pleas for mercy. Changing his angle, he began smacking the very base of her ass, each swat coming closer and closer to her now confusingly wet pussy.

A strange cocktail of fear, desire, and shame welled within her. As much as his attention hurt, some twisted part of her didn’t want it to end. And the closer he got to her core, the more that part took over. He was dominating her in a way she’d never imagined a man could, doing exactly what he pleased, when he pleased it. And she was powerless to stop him.

Tears stung at her eyes and rolled down her cheeks and just when she thought she might faint from the pain, Hawk stopped his furious clapping and his hot palm settled onto the round, fleshy orb of her ass and stayed there.

“It’s to keep the heat in,” he explained, his voice low and husky, as if he’d enjoyed meting out her punishment as much as she’d enjoyed receiving it. “It’ll serve your memory better. You will remember this, won’t you, Daz?”

Feeling ashamed and aroused at the same time, she realized that anything but the answer he wanted would probably only earn her another spanking. “Yes,” she whispered softly, her nipples tensing.

2016-01-09
+admin
Previous: The Lawman’s Lady by Kallista Dane
Next: The Billionaire’s Pet by Loki Renard