His Captive Pet by Measha Stone 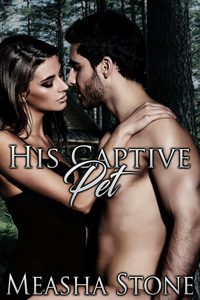 Aubree Stevenson isn’t used to being ordered around, but then her efforts to bring down a dog fighting ring put her life in danger and she ends up in the protective custody of a stern, handsome former Marine.

Blake Turner is not a man to be trifled with, and he wastes no time in making it clear that Aubree will obey him or be punished. After she puts his word to the test, Aubree’s bottom is bared for a painful, embarrassing strapping, and when she continues to defy her strict captor, she quickly discovers that he is prepared to take things much further. Soon enough, she finds herself stripped naked, outfitted with a collar and tail, and eating from Blake’s hand like a well-trained pet.

To her dismay, Aubree’s arousal grows more intense with every shameful display of forced submission. But even as he masters her body and claims her in every way, Blake must keep his captive pet safe from both her enemies and her own recklessness. Will he prove up to the task?

Publisher’s Note: His Captive Pet is a stand-alone book which is the third entry in the Owned and Protected series. It includes spankings and sexual scenes. If such material offends you, please don’t buy this book.

He shoved the glass plug into her mouth, rolling it around on her tongue. The plug pushed further down, gagging her.

“I didn’t have time to find the lube, so let’s hope you’re wet enough for this.” He yanked the plug out of her mouth, letting her gulp in a breath of air before he pulled her back to the patio table and shoved her back over the edge.

He kicked at her calves until she spread her legs. God help her, she wasn’t even fighting him.

She clenched hard. Useless, she knew, but she had to try. She needed to find some resemblance of her spine. She couldn’t let him go on with her giving in too easily.

“That will only make it hurt, sweetheart.” He pried open her ass cheeks and tapped the edge of the plug against her pucker. “Relax.”

“No.” She shook her head against the tabletop.

“It’ll hurt less if you relax.” He sighed with the words.

The rounded tip of the plug pushed against her again, circling and circling until the ring of muscle eased enough for him to push past it. Once the tip breached, clenching became harder, made it more uncomfortable.

He wasn’t shoving it in or being overly rough. He eased the plug in and pulled back, fucking her little hole slowly with the damn thing.

She squeezed her eyes closed, not wanting to be there, wishing like hell she could get her mind to travel somewhere else. She’d been able to do just that as a kid. When things were hard, the screaming too much for her bear, she’d send her mind somewhere else. A castle in Europe or at Disneyland, riding a roller coaster.

But he wouldn’t stand for it. He required her fully present.

“That’s a good girl,” he purred, as his free hand crept between her and the table, searching out her clit.

She bit her lip to keep from moaning. The plug moved further in, and his skilled fingers twisted and stroked her swollen sex.

“There you go, just a little more.” He pressed a kiss to her back and pushed forward again. “Are you going to come for me? Come like a good girl?”

2017-12-10
Chris
Previous: Daddy Says by Maggie Ryan
Next: Sold to the Gladiators by Jaye Peaches