His Captured Mate by Samantha Madisen 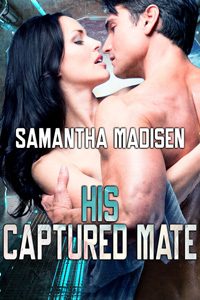 As a member of the human resistance, the last thing scientist Milla Orel wants is to draw the attention of Commander Tanin, the captain the Cylothian ship on which she is stationed. Unfortunately for Milla, when it is discovered that her genetic testing results were falsified and she is actually suitable as a mate, she is given to Tanin as a breeding slave.

After an intimate, deeply humiliating medical examination, Milla is brought to her new owner’s quarters so that he can begin preparing her for his use. Tanin makes it clear that he will demand her absolute submission as he claims her beautiful body in the most shameful of ways, and she quickly discovers that any disobedience will earn her a thorough spanking on her bare bottom.

In spite of her fury at being treated in such a manner, Tanin’s bold dominance arouses Milla intensely, and it isn’t long before she finds herself surrendering ever more completely to his mastery of her body. But when an attack by the resistance puts Tannin’s life in great danger, will she abandon her loyalty to her own species to come to the aid of her mate?

Publisher’s Note: His Captured Mate includes spankings and sexual scenes. If such material offends you, please don’t buy this book.

She squeezed her eyes, her breathing ragged. What would he do next?

His hands left her skin, and her chest dropped with disappointment.

But she had only a moment to feel it, because a hot, stinging slap cracked across her buttocks almost immediately afterward.

Before the pain could reach her mind, she was searching wildly for the source of the pain. It was so surprising to her that she let out a yelp. “Ow!”

She was furious with herself for saying that. She wasn’t going let this monster—

Another slap, this one even more red-hot, across her left buttock.

Now both of her cheeks were stinging and hot, and the sensation was spreading down from there.

Another three slaps—she knew now that they were being delivered with his hand—were delivered in quick succession. The heat of the smacks was now unbearable, and after the third she began to squirm against her restraints. “Okay!” she yelled. “Okay, that’s enough! I—”

Another firm slap on her butt made her choke on the words.

“It is enough when I decide it is enough,” Tanin said.

Milla felt hot tears welling up in her eyes. Her bottom throbbed, and she could almost feel the next slaps before they came. She flinched and twisted her body, trying to edge her sore bottom out of the way. She managed to move to the right and left, but it was futile. Each slap landed precisely where he wanted it to.

Tanin continued to spank her, though, and soon she was unable to get any words out. She was blubbering and fat tears were rolling down her face.

It then occurred to her that the only thing she could do was relent. Perhaps he was going to continue spanking her all night, but certainly he would not stop because she asked.

She let her body go limp and tried to just accept her punishment.

The rain of spanking wound down. Tanin delivered two firm smacks on her throbbing ass, and then, as she cringed inwardly in anticipation, he stopped.

A wave of heat rose up from deep inside her skin, burning like her humiliation.

And then she felt something even worse. She could feel her own arousal, threatening to snake down her thighs. It was gathering, fat and heavy like her tears… and then it began to drip down between her legs.

There was a faint click as the restraints on her hands released, and she felt the weight against her ankles give way as well.

“Get on your knees in front of me,” Tanin ordered.

2017-10-08
Chris
Previous: Leashed by the Dragons by Loki Renard
Next: The Oak Street Method: Ginnie by Emily Tilton