His Conquered Bride by Sassa Daniels 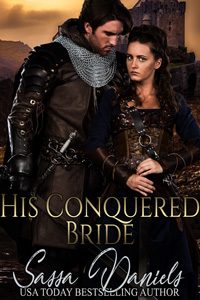 With her clan defeated in battle, nineteen-year-old Ailis MacDonnell has become the spoils of war. Forced into a marriage with Lord Alexander de Moray, she fears she will be used harshly by the foe who already took her castle from her. But though Alexander proves more than ready to punish his conquered bride’s bare bottom thoroughly for any disobedience, when her handsome new husband takes Ailis in his arms and claims her properly she is left utterly spent and satisfied.

Despite his stern demeanor and his willingness to chastise her as shamefully and as often as he feels it necessary, Ailis cannot deny her body’s response to Alexander’s firm-handed dominance, and her desire for him grows stronger with each passing day. But can she allow herself to fall in love with a man who will always be considered an enemy by many among her own people?

Publisher’s Note: His Conquered Bride includes spankings and sexual scenes. If such material offends you, please don’t buy this book.

“Spread your legs a little wider,” Alexander instructed. “I want to see that glistening cunt of yours.”

His crude words sending a thrill through her, Ailis complied immediately. Cool air lapped her soft moist flesh and she couldn’t resist shifting her hips. A large hand caught hold of her and stilled her movements. She felt a rush of air as Alexander’s palm flew toward her. It landed, not on her bottom as she’d expected, but right between her legs. She gave a little cry that was more from surprise than pain. There was a fleeting sting in her tender flesh, but it disappeared almost instantly to be replaced with a delicious warmth.

“You like getting your pussy spanked,” Alexander observed as he struck for the ninth and tenth times. “Don’t you?”

“Mmm-hmm.” Ailis had no words to respond. Her body had come alive, but her brain was so fogged with arousal, she could barely form a thought.

“You were such a good girl,” Alexander praised. “Would you like to come?”

Ailis could only nod. She heard a knowing chuckle from behind her before Alexander plunged two fingers into her sopping wet pussy. Her response was instantaneous. Ailis shrieked as her body convulsed with spasms of pleasure that blocked out the rest of the world. For long seconds, she could neither see nor hear properly. Blood rushed through her head and her body jerked as the orgasm seized every part of her. The thought flashed in her mind that she might die from the sheer ecstasy but, in that moment, she really didn’t care. If the end came now, she would embrace it.

Of course, it was not the end and, as she slowly regained her senses, Alexander took hold of her hips and arranged her limp, pliant body so she was on all fours once more, with her bottom positioned for his penetration. She twitched as Alexander ran his cock along her feminine cleft, bathing it in her juices before moving to press his manhood against the tight ring of her bottom.

“Be at peace,” he instructed her as she wriggled fretfully, “and this will go a lot easier.”

Ailis moaned as he pushed the head of his cock inside her. As her bottom hole was stretched, there was a deep burn in her flesh, but she made no protest.

“You’re very tight,” Alexander commented. “Perhaps I should have trained your bottom to take me.”

Ailis had no time to ponder how a woman’s bottom could be trained for this, as he drove forward, slowly and steadily, inch by inch. He pushed in against her body’s initial resistance, to embed his cock deep in her untried channel. She whimpered as she adjusted to the foreign sensation of being penetrated in a place she never imagined could be breached. As she breathed deeply, the discomfort lessened, but she was still intensely aware of being stretched impossibly wide.

“Please,” Ailis groaned, not knowing quite what she was asking for.

Alexander seemed to understand what it was she needed as he began to withdraw from her before pushing back in. After a couple of thrusts, Ailis was ready for more.

He slammed into her, with greater force this time. Picking up the pace, he drove in and out of her tight channel. The air was filled with the sounds of flesh slapping against flesh and Ailis clawed at the fur cover on the bed as her lusty moans grew louder.

“Good girl, Ailis.” Alexander ground the words out and she knew that he was as close to reaching his peak as she was.

He wrapped an arm around her waist and yanked her back against him as he plowed forward. His other hand slipped between her legs and played with her clitoris. When he suddenly pinched the little nub tight, Ailis squealed and drenched his fingers with a flood of her feminine fluids. As she jerked back against him, Alexander barked out a startling sound. As he pulled out of her, Ailis felt the heat of his seed trickling from her bottom and down her legs.

2018-11-30
Chris
Previous: Blushing for Her Masters by Samantha Madisen
Next: A Shameful Experiment: A Punishment Reverse Harem Romance by Emily Tilton