His Errant Ward by Celeste Jones 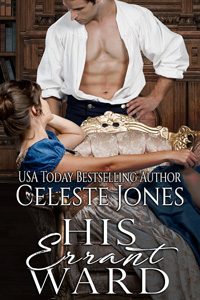 Though he is tasked with ensuring that Natalia Waltham marries a gentleman chosen by her father before his death, Zander Thwaite finds his beautiful ward’s charms difficult to resist, especially when her rebellious nature forces him to strip her bare and spank her soundly.

Natalia’s petulant behavior persists despite her guardian’s best efforts to tame her, however, and when an act of willful defiance permanently sabotages the match her father intended for her, Zander decides to cast propriety to the winds and give his errant ward exactly what she needs.

He will make her his, but first she will feel the sting of his crop on her naked bottom, and before she is allowed the pleasure of being claimed properly her virgin body will be used in every way except the one she so urgently desires. It is time for her to be sternly and shamefully mastered…

Publisher’s Note: His Errant Ward includes spankings and sexual scenes. If such material offends you, please don’t buy this book.

Staring at the odd root, Tallie puzzled out his reasoning.

In a flash, she discerned his intentions. A skilled horsewoman, Tallie had spent enough time around the stables to be familiar with the use of ginger for equine management. “No, absolutely not.” She stormed past him toward the door, but he took a firm grasp of her arm and dragged her to the bed.

He pushed her face down into the mattress, yanked her chemise up, then used one hand to spread her cheeks while he used the other to touch the ginger to her bottom hole.

Never in her life had she been humiliated in such a way. She struggled against him and he smacked her arse with his palm. “Settle down.”

Something pressed against the pucker of her arse and she bucked in surprise.

Zander smacked each of her inflamed bottom cheeks. “I said, ‘settle down’ and I meant it. I am not putting up with any more of your foolishness, Tallie. This is for your own good.”

“My own good?” she screeched, pushing up on her forearms and twisting to get a glimpse of him. “Have you gone mad?”

“That’s ‘have you gone mad, sir’ to you, Natalia. And, to answer your question, no, I have not gone mad. If anything, I have finally seen the situation clearly. It is time for you to be wed and learn to take instruction from a man. Starting with me.”

He grabbed her hands and placed them on her bottom. “Since you will not hold still and I only have two hands, you must assist. Now, spread your arse cheeks wide. I want to see your bunghole nice and clear.”

Though she whimpered into the bedclothes, she did as she was told, unwelcome longing building in her nether region. His commanding tone did something to her, something unexpected and presently unwanted. He was the most vexatious man she had ever met.

And his hands upon her satisfied the unsettled feeling that had been coursing through her.

Yet, he was determined to pass her off to another. She sniffled again into the quilt.

“Good girl,” he said, in a tone not quite so harsh, and she felt a mite better, despite the utterly degrading situation.

“Not right now you are not, but believe me, Natalia, you are like the most spirited filly in the pasture. And there is nothing wrong with that, it is what makes you so appealing. However, you are literally unbroken and in dire need of training. Which is what I intend to do.”

Thereupon he gave a push to the stiff root of ginger and seated it in her private hole, patted her on the arse as though she was a well-behaved pet, and assisted her to stand. She tightened the muscles of her bottom hole, unsure of how best to keep the intruding item in place. For the time being, at least, she had no wish to further anger her guardian.

“I-I thought it was supposed to burn,” she said, staring at the floor, too mortified to look him in the eye.

2019-04-26
Chris
Previous: The Warrior’s Pet by Samantha Madisen
Next: Claiming His Captive by Sassa Daniels