His Fated Bride by Mira Brooks 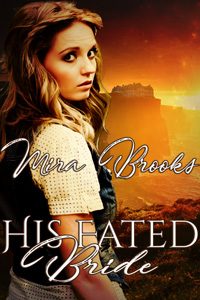 After purchasing the home of her dreams—an old manor house by the sea in Nova Scotia—Paisley Stanhope is soon confronted with evidence of a shocking truth: she has lived in this mansion before, almost two centuries ago, and it belonged to a man who was her husband. As she delves further into the secrets of the past, Paisley finds the means to go back in time to meet her fated husband, but she has barely had time to introduce herself before he makes her his wife.

Simon Helmsley is a man of an older era, and when his beautiful bride puts on a scandalous display of petulant defiance moments after speaking their vows he does not hesitate to bare her bottom and spank her until she is sore and sobbing. Yet while her stern, handsome husband’s strict correction infuriates Paisley, it also leaves her longing for him to claim her properly.

Over the coming months, Paisley learns the hard way that Simon’s willingness to strip her bare and chastise her thoroughly and shamefully was not restricted to their wedding day. His firm-handed dominance merely increases her need for him, however, and his mastery of her body grows more complete with each passing day. But when an angry quarrel prompts Paisley to run away and return to her own time, will Simon let her go or will he chase after his fated bride?

Publisher’s Note: His Fated Bride includes spankings and sexual scenes. If such material offends you, please don’t buy this book.

“Simon, please!” she mewed, wishing she could reach back and touch herself. She was on the cusp, dripping with need for him to do something to send her sailing over the edge in orgasmic pleasure. Every nerve in her body was alive with the prospect of how close that release was. Even as tears streaked her cheeks and pooled beneath her, her body shook with the polarising feelings of need and pain. If he ran his finger through her slit she was certain she’d come so hard she’d feel it as long as the tenderness in her ass cheeks.

“Why did I spank ye, love?” Simon asked, continuing to hold her body captive at the peak of climax. He dipped his fingers down between her slippery folds as if reading her mind and began to lightly stroke. Cursing him for knowing when to hold back and when to apply pressure, she mentally tried to focus on what could entice him to make this happen before she was left totally frustrated. Trying to grind his touch harder toward her clit, she moaned when he responded by removing his hand altogether and swatted her burning flesh again.

Paisley felt herself shaking. The tremor was unable to be contained, and she knew he already recognised he had won. With her head bowed against the flowery scented quilt, she confessed, “I was defiant and rude. I spoke too harshly, and I denied you our first kiss. Ohmygawd! I want you, Simon.”

“I can be a very bossy man, sweetheart. I expect ye to be a good girl. Are ye going to give me much more trouble, if I give ye what ye need?” he asked huskily. In truth, the postponement was torturing him just as much as it was her, but he needed to make an impression on his new bride, especially this first time.

“No!” she heard herself promise almost as if her desire was speaking over every other conscious thought. “Simon, please, I’ll try to be good, I swear.” Squeezing her eyes tight, she hoped his next movements would be to free his cock from the restraint of his trousers and drive it as far into her as it could possibly sink.

“Why do I think that yer try will become complete disobedience once ye’ve had yer way?” Simon’s question was colder than his earlier words. “I promised ye a punishment, Paisy, and I don’t break promises.”

When his hands abandoned her breast and legs, she managed only a scream, “No!”

His arm tightened around her midsection and the brush’s handle disappeared from her back. The whistle through the air was silenced only by the resounding crack as it connected with her inflamed skin. It repeated twenty straight times, landing at various spots of hideous epicentres that rippled pain throughout her body.

Paisley screeched at each connection between brush and flesh as the fiery pain consumed her. She was weeping so hard, it grew difficult to breathe when she needed to.

This was most definitely a punishment.

2018-10-13
Chris
Previous: Ravaged Grabs Three Top 10 Spots
Next: The Duke and the Thief by Ashe Barker and Jaye Peaches