His Feisty Human by Ivy Barrett 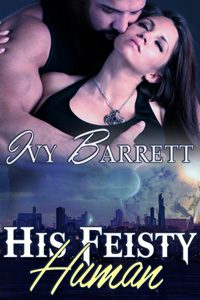 Mal Ton has spent his life fighting for the survival of his people, often deep behind enemy lines, and he has never been hesitant to properly master a woman if her breathless, quivering surrender to his stern discipline and skillful lovemaking would aid his cause. From the moment he first sets eyes on Lorelle, however, it is obvious that the beautiful, spirited human will be different.

Despite the intense lust brought on by a cleverly-designed alien virus, Lorelle has kept herself under control over the long weeks since she was abducted from Earth. But with each passing hour, her helpless arousal drives her closer to madness, and she has grown desperate by the time rescue arrives at last in the form of a huge, handsome Stilox warrior.

Lorelle’s situation is dire, and Mal Ton is left with no choice but to take matters into his own hands. After spanking her bare bottom soundly to overcome her foolish reluctance to submit to the treatment she requires, he claims her hard and thoroughly, bringing her to one shattering climax after another until the need which threatened to consume her is finally satisfied.

The passionate coupling serves its purpose, but Lorelle’s desire for her rescuer does not abate. When it becomes clear that an irreversible bond has been formed between them and they are now mated for life, will Mal Ton be prepared to do whatever is necessary to tame his feisty human?

Publisher’s Note: His Feisty Human is the second book of the Captives of Stilox series. It includes spankings and sexual scenes. If such material offends you, please don’t buy this book. Also note that an earlier version of this book was previously released by another publisher with the title Shifter.

“Enough of this foolishness.” Mal Ton caught her upper arm and pulled her toward him as he sat down on the edge of the bed. She struggled, yanking against his hold, but it did no good. Nearly faster than she could comprehend, he had her face down over his knees. Then he casually reached between his legs and unfastened her uniform bottom. One firm yank and her pants dropped around her knees, her panties half a second behind.

“What the fuck are you—” His first hard spank trapped the rest of her sentence in her throat. His hand was huge, covering an entire ass cheek with each swat. She cried out and called him every vile name she knew, but he kept right on spanking her naked bottom. Heat spread like fire, sinking deeper and growing hotter with each firm stroke. Her pussy fluttered and hot liquid seeped out between her folds. It was humiliating, and infuriating, yet it gradually eased the urgency tormenting the rest of her body.

“Better?” His deep voice played across her senses, reigniting the need.

Rather than give him the satisfaction of knowing he’d been right, she snapped, “Fuck you.”

He spanked her some more, harder this time. Each firm blow sent sensations ricocheting through her overstimulated nervous system. She wrapped her arms around his muscular leg, clinging to him as her body battled with itself. Each stinging slap drove the urgency back, yet his masculine scent and the inescapable ridge of his erect cock against her hip kept the fire smoldering and her juices flowing.

Unable to help herself, she eased her legs apart, praying he’d understand the invitation. His next spank never fell and then he caressed her stinging ass, spreading the heat as he eased his hand between her thighs. “Still pretending you don’t want this?” His fingers lightly stroked her sopping folds. “You want cock so bad you’ve made a wet spot on my pant leg.”

She whimpered and moved her legs even farther apart.

“Say it, Lorelle. Do you want me to fuck you with my fingers?”

“Yes.” Then much to her horror, she whispered, “Please.”

He pushed one long finger into her aching pussy, twisted his wrist then carefully pushed in another two. Her inner muscles stretched around the fullness, easing the demand, yet making her horribly restless. She tried to move, to drag his fingers out so she could slam them deep again.

His free hand pressed against the small of her back, holding her still. “I’m in control here. You come when I’m ready to let you.”

She gritted her teeth as fury burned away a bit of the delirium. “You’re such an asshole.” His free hand lifted then spanked her already burning ass. She cried out more from indignation than actual pain. “I hate you!”

Before she could throw herself off his lap, his hand began to move between her thighs. He fucked her hard and fast as his free hand rained down more slaps on her abused posterior. She screamed and wiggled, but most of her movements drove his fingers deeper into her cunt.

His spanking hand began to stroke her burning ass cheeks, allowing the fire between her thighs to escalate. Within seconds she came so hard lights flashed before her eyes. But a new wave of heat crashed in on top of the release, leaving her anything but satisfied. He pulled his fingers free of her needful pussy and she moaned. Would he fuck her now for real, ride her over and over until the fire was extinguished for good?

2017-01-21
+admin
Previous: The Duke’s Prisoner by Kallista Dane
Next: His Little Actress by Rose St. Andrews