His Firm Direction by Alexis Alvarez 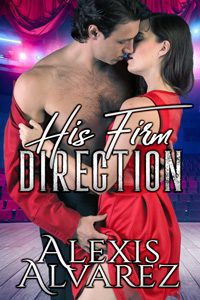 When she is offered the lead role in a bold, controversial new play by Axel Masters, the hottest off-Broadway director in the country, twenty-seven-year-old actress Cleo Martinelli is delighted. As rehearsals get underway, however, she finds herself having trouble getting into the mindset of her character, a woman whose firm-handed husband spanks her when she is disobedient.

After Cleo’s difficulty playing her part convincingly leads to a public confrontation with Axel, she worries that she will be fired, but instead the handsome director calls her into his office, scolds her for her petulant attitude, and then suggests that she is in desperate need of the kind of stern correction the character she is struggling to play receives from her fictional husband.

To her surprise, being reprimanded like a naughty girl proves to be intensely arousing for Cleo, and soon enough she is lying over Axel’s lap with her bare bottom exposed for a thorough spanking. His bold dominance leaves her begging to be taken long and hard, and a passionate romance quickly blossoms between them.

Cleo’s new understanding of what it means to submit to a man’s strict discipline pays off on stage, but as the positive reviews pour in she cannot help wondering what will happen to their relationship after the curtain falls on the last showing of the play. Is Axel truly in love with her, or does he see her as nothing more than an actress in need of his firm direction?

Publisher’s Note: His Firm Direction includes spankings and sexual scenes. If such material offends you, please don’t buy this book.

“Sir. Last reminder. It’s up to you to remember from now on.”

“Good job with the Sir, but it’s only going to get harder, so brace yourself,” he warned her, and his hand fell again and again, first on the left cheek, then the right. Soon he was slapping her three or four times in a row on one cheek, in the same spot, making her whine and cry out. Then he switched to repeat the treatment on the other side until she squirmed and begged.

When her bottom began to sting harder, she shifted, trying to get away from his punishing hand, but he held her in place without effort. “Cleo, stop trying to get away. You are to accept the punishment without complaint, or you’ll get extras with my belt.

“No! Please, not the belt,” she cried out. “I’ll be good.” She forced herself to still her hips, although she wanted to push and pull, to do anything to get away from his hard, heavy hand.

Now he began spanking in earnest, lifting his hand up high and bringing it down with force, slaps that echoed around the room and had her begging for mercy and genuinely twisting, trying to get away. It hurt. Not the kind of pain that felt like it would leave injuries, or anything, but fuck! Who knew a spanking actually hurt?

“Axel, Sir. It hurts so much. It burns, it stings, it’s on fire.” She jerked her hips to pull away from his punishing hand. “Ow.”

In response, he slapped again, concentrating on the tender skin at the base of her thighs, make her moan and writhe. The pain in her rear was intense, but another feeling matched it, that of arousal. She could feel new moisture between her legs, and even though the spanking hurt ferociously, she didn’t want him to stop, not exactly. If only he’d lighten up a bit, or rub it again, soothe the wicked burn, let that warm feeling grow, the one that was igniting in her belly. She pushed her clit into his legs, hard, trying for some relief, and felt him under her body—he was hard. He was aroused by this, too.

“Axel,” she begged. “Please just give me a break and rub my ass again. That felt so good. Please.”

“Sorry, Cleo.” His voice held remorse and resolve. “This is supposed to be punishment, so no more rubbing until it’s over. It’s time for those extras you earned… the ones with the belt. Don’t touch your ass.”

Adrenaline swirled through her body and she swiveled to look at his face.

“Watch what I’m doing, Cleo,” he ordered, shifting her so she was sitting on the couch.

“Ow! My butt is already sore,” she complained, but at a stern look from him, she stayed seated, although she shifted uncomfortably on the rough fabric, which made the stinging more prominent.

“No, please,” she begged, anxiety flooding her, as he deliberately held her eyes, pulling the belt from the loops with a soft swish. He folded it over and slapped it into his palm, and she jumped. “God! Axel.”

“Sir.” He nodded his chin at her. “In just a second, you’re going to get up on your knees and lean over the back of the couch. Keep your thighs spread wide. You’re getting ten hard ones with the belt. After that, I think you’ll be properly contrite.”