His Firm Guidance by Constance Masters 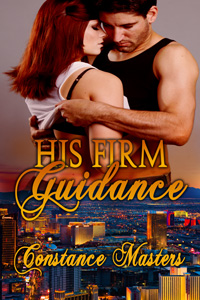 Since the day that Tyler finally tired of watching Whitney waste her time with one worthless boyfriend after another while going nowhere in life, she has missed both his friendship and his caring encouragement. Looking back, she often wonders how things might have been different if he had actually spanked her as he once threatened.

Then, after yet another boyfriend-related disaster, a chance encounter in Las Vegas gives her something she never dreamed possible… a second chance with Tyler. After a night spent in an effort to drown their sorrows with alcohol, the old friends find themselves next to one another in bed with a marriage certificate proclaiming them husband and wife, and to Whitney’s secret delight, Tyler seems in no hurry to have the marriage annulled.

Having Whitney as his wife is a nearly lifelong dream come true for Tyler, and when he senses that she is sad about the idea of an annulment, he decides to take the bull by the horns. He suggests that they give the marriage an honest try, with one condition. He cannot and will not watch Whitney ruin her life with one bad decision after another with no means to correct her, and he lets her know that if she wants to remain his wife, then she will submit to his strict but loving discipline when he feels it is needed.

Whitney is initially appalled by the idea of lying over her husband’s knee to be chastised like a naughty girl, but at the same time she cannot help but remember all the days she spent wondering what could have been. If a good, hard, bare bottom spanking whenever she misbehaves is the price she must pay to have the man of her dreams, she decides that she is ready to submit to his firm guidance. Many challenges must be faced, though, as the young couple seeks to build a new life together. Will they waste this second chance, or will they overcome every hurdle together as man and wife?

“Here we go; another lecture.”

“No lecture. There’s no point.” Her bottom clenched with anticipation as the car suddenly pulled off the road.

“I didn’t ask you what you wanted, Whitney. I asked you to get out of the car.”

“Are you going to leave me here?” She knew he would never do that, but it was better than asking him flat out if he was going to spank her.

“Come on! Do you really think I came out here at this time of night to pick you up so I could dump you by the side of the road?”

“You guess not? You KNOW that I’d never do that. That just proves to me that you DO need a wake-up call. I care about you, Whitney, and I care what happens to you.”

She tried to tug out of his grasp but he was too strong. He undid her seatbelt and tugged her out of the car. “Stop!” she hissed. Before she knew what was happening, she was bent over the hood of the car.

“This skirt barely even covers your panties.”

Her eyes were wide with disbelief as the short skirt was raised, leaving her skimpy panties on display for anyone who might drive past. “Stop, Tyler! Someone will see!” Her only answer was a hard smack that exploded in the center of her right cheek. She yelped with surprise at the sudden sting, but Tyler ignored her and slapped the other side just as hard.

“You’re worried about someone seeing your panties?”

“Yes, yes.” She danced up and down trying to dodge the sharp spanks that were landing without warning wherever Tyler’s hand connected with the wriggling target. The pain stopped, there was silence for a second, and she took a deep breath, only to splutter it back out again in outrage when she felt the cool breeze float across her bare bottom as her panties were yanked to her knees.

2013-06-14
+admin
Previous: The Westerfield Affair by Renee Rose
Next: Eight of the Best by Kenny Walters