His Headstrong Bride by Sassa Daniels 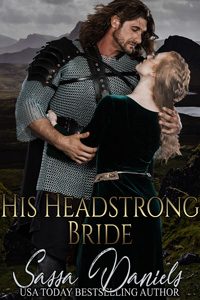 From the moment he set eyes on Lady Margaret Baillie five years ago, Lord Iain de Moray has dreamed of ravishing her beautiful body so fiercely that she cries out his name as he makes her his own, but he would not have expected their next meeting to be the result of her sneaking into his military camp with a knife, dead set on settling a score with a man being held captive there.

When Margaret attempts to escape and refuses to answer his questions upon being apprehended, Iain does not hesitate to lift her skirts and spank her bare bottom soundly. Her continued defiance earns her the sting of his belt on her sore, already bright red backside, but in spite of everything the humiliating chastisement leaves her longing for him to claim her hard and thoroughly.

After Margaret’s desire for Iain is inadvertently put on shameful display, they are soon wed by the order of the king, but will the battle-hardened Scotsman’s firm hand prove sufficient to cure his headstrong bride of her reckless ways or will more intimate means of correction be required?

Publisher’s Note: His Headstrong Bride is a stand-alone sequel to His Conquered Bride. It includes spankings and sexual scenes. If such material offends you, please don’t buy this book.

Once she was settled over his rock-hard thighs, he lofted her skirts up around her waist. Margaret took a deep breath as she felt the light evening breeze on her skin. Beginning to feel nervous, she wriggled her hips, hoping if she could loosen her body, it would somehow help to calm her mind. Just as she was beginning to relax, something cold and wet was smeared across her bottom hole. She reared up with a start.

“Oil?” Margaret could not hide her surprise.

“Aye, it will make this easier on you.”

Although she had a dozen questions about why Iain happened to have that hideous olisbos thing with him and now some oil as well, she was not about to argue against anything that might lessen the humiliating ordeal she was about to go through. She lay there quietly as Iain rubbed the oil against the puckered entrance to her rear passage. As he slid a long, thick finger inside her, she gasped. The initial penetration was strange, uncomfortable, but she adjusted to the intrusion more quickly than she would have expected. When Iain pushed a second finger into her untried hole, she whimpered and gripped his leg tightly.

“How does that feel, Margaret?” he asked.

“The truth now,” he warned, seeming to know instinctively that her knee-jerk response would be to complain about what he was doing to her.

“It is odd, but not as terrible as I feared.”

He gave a grunt that she thought might signal his approval. Then he began to move his fingers in and out of her bottom hole, stretching her, preparing her for what was to come. As she gradually became accustomed to the friction against her sensitive flesh, something she had not expected happened. Her breath quickened, and her feminine bud began to pulse furiously.

There was no point denying it when the potent scent of her arousal permeated the air, but she wasn’t ready to confirm it either. Iain gave a knowing chuckle. He withdrew his two fingers from her and an unexpected protest fell from her lips. It was bizarre, but she felt empty somehow. Then she felt something else pressing against her. As Iain began to push the leather-covered phallus inside her, a sense of panic overtook Margaret. Although undoubtedly smaller than his shaft, it was bigger than his finger and its initial entry caused a jolt of discomfort. She struggled to get up from Iain’s knee, but an insistent hand at the small of her back held her down.

“Settle yourself, lassie. It will only hurt for a moment.”

Margaret hung her head and took deep breaths as the object was pushed inside her. When it was fully inserted, she felt Iain’s fingers brush against her leg as he tied the leather strap around her thigh. She looked over her shoulder in question.

“This will prevent it from slipping too far inside you,” he told her, “and make it easier for me to remove.”

His words horrified Margaret, yet she found something reassuring in the look of appreciation he bestowed upon her as he helped her to her feet. She stood still for a moment, trying to accustom herself to the strange sensation of fullness. As she tried taking a couple of tentative steps, she felt the object pressing forward, causing a feeling that was both pleasurable and painful.

“How long must I have this thing inside me?” Margaret asked, scrunching up her nose in distaste.

“For as long as I see fit,” Iain replied. “Now, let’s join the others. I fear our dinner will spoil if we do not eat soon.”

2019-02-09
Chris
Previous: Where Bad Girls Go: A Punishment Reverse Harem Romance by Emily Tilton
Next: Theirs to Share by Jaye Peaches