His House, His Rules by K.C. Perrin 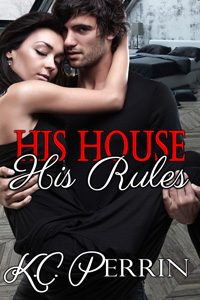 After she is evicted by a sleazy landlord, Charlotte Harps is left homeless and desperate, but fate intervenes when Frederic Vandenburg—a man she has never met before—sees her sleeping on a park bench and offers her a place in his home until she can get back on her feet.

While she gratefully accepts his offer, Charlotte cannot help wondering if Frederic has ulterior motives for his generosity, and her fears seem to be confirmed when she snoops in his closet and discovers wrist cuffs and a variety of spanking implements. Frederic continues to act as a gentleman, however, and in the end Charlotte feels so guilty about her invasion of his privacy that she confesses to him and nervously asks if he will give her the spanking she deserves.

After a discussion of her naughty behavior, Frederic puts Charlotte over his knee and spanks her soundly, then establishes a set of rules she will be expected to obey while she lives under his roof. Yet even though her petulant attitude frequently leaves her with a bright red, well-punished bare bottom, Charlotte finds herself longing for Frederic to take her in his arms and claim her properly. But will she ever be able to overcome the trials of her past and learn to trust him fully?

Publisher’s Note: His House, His Rules includes spankings and sexual scenes. If such material offends you, please don’t buy this book. Also note that this book was previously self-published by the author with the title Discipline for Charlotte.

Looking up as Charlotte returned to the room and seeing her standing hesitantly in the doorway settled his resolve as well.

With her face cleaned and her hair combed back, Eric was suddenly reminded of what an attractive young woman Charlotte was. She still wore nothing more than her underwear, a sexy set of matching bra and panties. Her bare skin looked soft, her eyes were opened large, her face full of anticipation, fear, and excitement.

It would be a pleasure having this naughty girl across his lap and spanking that bare round bottom.

“Come here,” he said, as he remained sat down on the edge of the bed. Charlotte approached him slowly, stopping right in front of him.

“I’ve been very disappointed with you today, young lady,” he said. Charlotte blushed and this encouraged him to go on.

“You really hurt my feelings when you threw that tantrum yesterday. I didn’t expect such behaviour from a grown woman such as yourself.” He paused to gauge her reaction, but Charlotte just blushed and looked down at her feet.

“At least you didn’t bother to put on a dress while you freshened up. After tearing the one you wore yesterday I think it’s fitting that you’ll get your punishment in your underwear. Next time then, you will think twice about being so careless.”

He looked at her and asked, “Well, do you have anything to say for yourself?”

Charlotte finally looked up at him, her red-flushed face unbearably cute. “No, sir,” she said. “Just that I’m sorry.”

Eric swallowed when she called him ‘sir.’ He felt the blood rush to his groin when she used the proper honorific without him telling her to. She stood in front of him with her feet crossed and her fingers entangled in front of her soft panties right in front of his eyes.

“Did you at least work on your applications today as you didn’t go to work?” he asked.

Eric shook his head. She was making it so easy for him. She really did deserve this spanking. He only hoped he could control his own arousal enough to concentrate on her needs.

“Get on the bed,” he commanded, placing his hand on the mattress beside him to indicate the right side.

Charlotte knelt beside him.

“Now, over my lap,” he said, guiding her across his knees.

He breathed deeply when her weight pressed down on his legs, her upper body resting on the bed beside him, her legs on the other side. Her back was arched, her bottom raised, round soft cheeks covered in the thin fabric of her panties, begging to be spanked. He placed his hand carefully on her behind, softly stroking her bottom. He wouldn’t hurry it this time. He would take his time, relax her into it, and then give her the spanking she deserved.

He hooked two fingers behind her panties and pulled softly.

2017-07-16
Chris
Previous: The Ranger’s Rules by Lily Harlem
Next: Her New Masters by Rose St. Andrews