His Human Conquest by Stella Rising 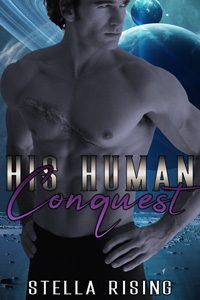 When she is taken captive by elite warriors preparing for an invasion of Earth, scientist Jillian Wexler assumes they are interested in her expertise with deep space monitoring, but she quickly discovers that the huge, handsome alien who leads them has plans for her beautiful body as well.

Commander Vol of the Dominars needs a liaison with the people of Earth, but Jillian will be much more than that. She will serve as an example for the rest of humanity of both the obedience expected of them and the pleasure which can be found in complete surrender to their new masters. He will make her his pet, first training her thoroughly and then using her as he pleases.

Jillian soon learns the hard way that defiance will be sternly and shamefully punished, yet even with her cheeks blushing and her bottom sore both inside and out, she cannot hide her intense, helpless arousal. But though Vol’s rough, dominant lovemaking leaves her utterly spent and satisfied, can she allow herself to fall in love with an enemy intent on conquering her world?

Publisher’s Note: His Human Conquest is a stand-alone novel which is the second book in the Captives of the Dominars series. It includes spankings and sexual scenes. If such material offends you, please don’t buy this book.

I groan as the wide orb at the end of the hook stretches my tight muscle. “No, sir,” I reply after a moment, quite confident in my answer. “Never.”

Next comes the butt plug. Whether for the audience’s benefit or his enjoyment, Vol takes his time inserting the bulbous toy. He presses it in slowly and pulls it out, again and again, savoring my pained squeals and mortified moans. I shouldn’t be enjoying this, but it feels wonderful to be filled so completely. Even being tightly bound and on display for the aliens can’t take away my enjoyment.

Somehow I manage to comply. I look around, but don’t see Vol—in fact, I don’t see anyone. The Dominars have left.

“I sent them away, Jillian,” Vol explains, coming into view. “They’ve seen what I wanted them to. What happens now is just between us.” He pulls down his pants, revealing his fully erect member. When he holds it up to my lips, he doesn’t even have to give the command; I open my mouth and take in as much as I can.

“You can come, pet. But if you don’t get me off, I’m going to leave those vibrators on all night long.”

Is he serious? The threat scares me, but also excites me more than it should. He can’t be serious, right?

Not wanting to find out, I start sucking as hard as I can. The vibrators don’t make it easy, though; my first orgasm comes on like a tornado, lifting me out of my head and taking me for a ride. I can’t keep my lips sealed around Vol’s cock, I’m screaming so loud. He holds my head in place by my hair, which only makes me hotter. The feeling of being controlled grips and lifts me—I felt it before, but now I can’t deny it anymore. Having Vol’s enormous rod thrust into my mouth makes me wetter and wetter—I’ve barely started sucking again when my second orgasm coalesces.

2018-07-07
Chris
Previous: The Naughty Bride Clinic by Carole Archer
Next: Brought to Heel: An Alpha Shifter Romance by Delta James