His Innocent Bride by Kryssie Fortune 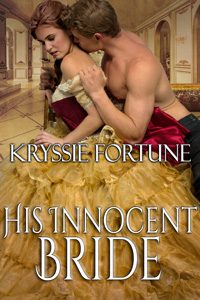 Going about her mundane life in a small fishing village, Alethea never dreamed she would end up with a man like the Earl of Deanswood, yet when she caught the handsome gentleman’s eye he wasted no time in making her his wife. Unbeknownst to Alethea, however, her conniving mother has convinced Deanswood that she has no interest in the marital bed. Devastated by his seeming disinterest, Alethea searches for someone to instruct her in the ways of enticing a man.

When a friend informs Deanswood of Alethea’s plans, he decides to train his new bride himself. Soon enough, Alethea finds herself naked, blindfolded, and helplessly bound as she is thoroughly spanked and then brought to one blushing, quivering climax after another. But when Alethea’s life is threatened by her mother’s vicious scheming, can Deanswood protect his innocent bride?

Publisher’s Note: His Innocent Bride is a stand-alone novel which shares the Regency-era setting of Wickedly Used. It includes spankings and sexual scenes. If such material offends you, please don’t buy this book.

When the paddle connected with Alethea’s behind, her scream came from her toes, through her belly, and out from her lips. Tied down and helpless, she sobbed out her pain. Her tutor paused and stroked her behind. “This paddle leaves a lovely pattern on your arse.”

The next two blows landed on her sweet spots, making her pant and twist in her bonds. Ecstasy beckoned. She let her mind drift freely. There were no commandments to break. No deadly sins to commit. No actions to guard. Submission lifted a weight from her shoulders.

His next few blows were harder, reinforcing his control. She sobbed again, but the more he battered her behind, the more the fight leached out of her. When he returned to the tender flesh on the top of her thigh, she screamed again. Her sobs turned into small mewls. Her body went limp. Her thoughts blurred, but her body burned with wanton urges.

As she submitted, heat blossomed deep inside her, clawing its way through her blood. Her pussy tingled and tensed. Letting go of control freed her spirit. Beyond hurting, she was lost in wicked needs and dark desires.

Each time the paddle landed on her bottom, jolts of pleasure rippled through her bones. When he reached between her legs and pinched her clit, tremors shook her body. Her juices pooled between her legs like honey flowing from a comb. It covered his hand and coated her inner thighs.

When her tutor ran one finger over her puckered anus, she tensed and shook her head. Ignoring her protest, he slid his little finger inside it. It only hurt for a moment. He delved deeper, before pulling his finger back then pumping deeper still.

Alethea wriggled, excited but uncertain and breathless. “That’s… It’s… No. Just no! That’s wrong, isn’t it?”

He slid another finger into her arse, stretching her and making her gasp. Reaching around her with his other hand, he pinched her clit. The combination of pain and pleasure made her come again. “Your husband will want to claim you here. I’m only loosening you up for him.”

She groaned and wriggled, her bottom sore inside and out. “If Deanswood wants to claim me there, he can loosen me up. That place is as private as my pussy.”

Her tutor made that sexy chuckling noise she liked so much. “I’ll lay odds that your husband will have some metal plugs to stretch you here. Once he has, he’ll claim your bottom hole as well as your pussy. The more he stretches it, the more you’ll enjoy him screwing you there.”

His crude language made her gasp. Letting anyone explore her darkest hole went against her religious upbringing. She should hate it, but excitement stirred in her belly. Thoughts of Deanswood exploring that naughtiest place made her nipples ache and her pussy tingle.

When Alethea’s tutor pulled his finger from her behind, she felt empty and lost. He’d shown her so much pleasure, but the way he mingled it with pain confused her.

Her brain went into overdrive. How would Deanswood stretch her, and would it hurt? What sort of plugs? And could she bear him putting anything in her darkest hole? Thinking about it made her nervous, but she’d trust her husband not to hurt her.

After her tutor had helped her sit up, he moved away, and she heard him washing his hands. She still sobbed softly, shaken by the way her body reacted to a stranger’s touch.

Her bottom felt sore, inside and out. The way his finger had delved deep inside her rear entrance had felt deliciously sinful. Her common sense told her to stay stiff and distant, but she’d never felt so at peace.

2018-08-18
Chris
Previous: Marked and Mated: An Alpha Shifter Romance by Delta James
Next: The Master by Ashe Barker and Katy Swann