His Little Bride by Aurie Jameson 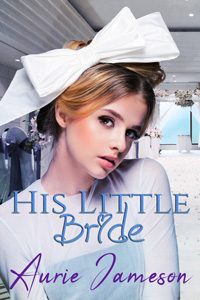 Though she is delighted when her handsome, dominant boyfriend proposes, Jen Simmons is caught off guard by his declaration that she will be not only his wife, but his little girl as well. Being taken over his knee for a spanking is one thing, but Jen is left blushing crimson by the thought of calling him daddy as he looks after even her most intimate, embarrassing needs.

Despite her hesitance, however, Jen soon finds herself being bathed, dressed, and cared for in every way, and she quickly discovers that her daddy will not hesitate to deal with disobedience in ways more shameful than she would have ever imagined. Yet even with her cheeks flaming and her well-punished bottom sore both inside and out, she cannot hide her body’s response to his strict correction, and her passion for him is soon burning hotter than it ever has before.

But as the wedding approaches and the stress of working full-time while planning for the big day becomes overwhelming for Jen, will her daddy know exactly what his little bride needs?

“No, please!” She didn’t know what a butt plug was, but it wasn’t hard to guess what it was going to be used for.

Will ignored her and carefully lubed the small pink silicone butt plug. It wasn’t much larger than his index finger, which had invaded her bottom in the past, so he knew she wouldn’t be in any pain. Jen had always been extremely embarrassed when he would put his finger into her bottom hole.

It made her extremely contrite.

When he had the little plug lubed up, Will parted the chubby cheeks on his lap with one hand. Jen’s cheeks immediately clenched at the contact.

“Relax your cheeks now, Jen,” Will ordered. “I told you I wouldn’t spank your bare bottom but I made no promises about your thighs.”

Jen whimpered, but relaxed. She hated having her thighs spanked.

Will wasn’t in a hurry. He took his time parting Jen’s chubby bottom cheeks and lining up the plug to her little pink anus. He pressed it gently to her hole, letting it rest there.

“This is going to stay in your bottom until we get home,” Will said as he held the plug to her hole. “Maybe next time, you’ll remember that little girls are always to behave in public.”

“I’m sorry!” Jen cried. She had never been so embarrassed in her whole life. No one was around, but just the act of having her cheeks spread and a plug pressing against her hole made her feel so naughty. Her whole face was burning as she wriggled over Will’s lap.

Jen gasped when Will slowly pushed against the plug. She whined as it entered her inch by inch so she could feel the entire thing go in. Her anus stretched painfully to accept it, intensifying her squeaks and whimpers. She attempted to wiggle off his lap but Will held her firmly. When the plug was about halfway inside her, she felt Will wrap a large arm around her waist to keep her in place.

“Stop moving and it won’t hurt as much,” Will said simply.

Jen yelped when the widest point of the plug slipped inside her. The rest followed quickly and with it, a sense of overwhelming shame filled her. Her face felt hot as she wiggled to get used to this new sensation. She felt full and naughty and embarrassed.

Will gazed down at Jen’s bottom. He could barely see the plug between her full cheeks. He gave each perfect mound a rough squeeze before lifting Jen up and settling her on his lap so her face was in his chest, her knees on his thighs. Her bottom poked out and she kept her eyes down, upper cheeks pink.

Slowly she did so, her large doe eyes glossy.

Will kissed her, hands reaching around to cup her bottom cheeks. He pressed lightly on the plug, causing Jen to whimper. He pulled away after a couple of moments but kept his hands on her tush.