His Little Captive by Meredith O’Reilly 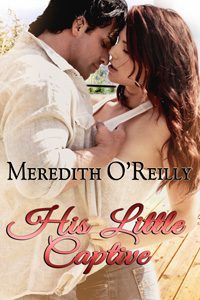 After waking up in a room she doesn’t recognize, twenty-year-old college student Lilly Parkins discovers that she has been placed in a secret government program for adult women who would benefit from living under the care of a firm but loving daddy. For the next few months, all of her needs will be provided for so that she can experience the childhood she never had.

Having been orphaned years ago, Lilly has grown accustomed to depending only on herself, and she is none too pleased by this arrangement, but when she meets her new daddy, Charles Davidson, she cannot help being impressed by the handsome, kindhearted businessman.

Charles makes it clear that while he will never be harsh with Lilly, he will be stern if her behavior makes it necessary, and when she speaks rudely to him he bares her bottom and spanks her soundly. In spite of his strict discipline, however, Lilly delights in Charles’ care and attention, and she soon finds herself longing for him to take her in his arms and make her his. But when her time in the program comes to an end, will it mean saying goodbye to him forever?

“Hey! You can’t do that,” she screeched, turning around to try and pull her pants up. There went her compliance. Grabbing her wrist, I pinned it to her back as I said, “This is going to be a bare bottom spanking, one that you’ve earned. If you try and interfere again, I’ll go get my handcuffs to stop you from moving and afterwards, you’ll be punished with a bar of soap in your mouth. So, I suggest you reach for your pillow if you want to hold onto something.”

I released her hand and without another word, her arms wrapped around her pillow and she hung on.

Getting back to her pink sparkly panties—so damn cute—I pulled those down, revealing her perfect creamy white ass.

Rubbing my hand over it, warming her skin, I knew it wouldn’t stay pale and pristine for long, but little girls who broke the rules needed to be punished.

Without prolonging the inevitable, I began with four hard, crisp spanks on each cheek. She gasped, her entire body shaking as her backside turned a light shade of pink.

With my free hand on her lower back to keep her steady, I was ready to proceed.

This time, I placed two spanks on each side, which caused her to whimper as her cheeks turned a faint shade of red.

I knew her bottom must be stinging by now, but I hoped the pain would stop her the next time she thought to hit me. Or better yet, hopefully next time, it made her turn to me to comfort her, instead of running away.

Taking a break for a moment, I ran my palm over her bum. It was predictably warm, but not quite hot yet. It would be by the end of our lesson.

Glancing up toward Lilly’s face, I saw she was holding onto her pillow tight and I could hear her sniffling. Wanting to get to our snuggles, I got on with the punishment.

When I laid three swats on each of her sit spots, she howled in pain as her breath hitched with sobs. My poor little girl.

I finished her spanking with the two last smacks on her ass, causing it to turn as bright as a ripe tomato.

“You’re all done, sweetheart. Your punishment is over,” I cooed, turning her over so we could cuddle.

She wrapped her arms around me and buried her face into the crook of my neck and she sobbed.

Picking her up, I took a seat in the rocking chair and began to rock back and forth, just letting her cry out her pain.

2017-05-13
Chris
Previous: Her Rancher Daddy by Shelly Douglas
Next: Taken from School by Emily Tilton