His Little Earthling by Katie Douglas 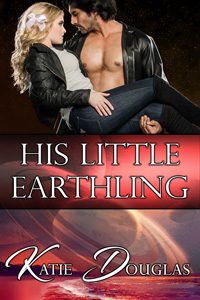 Thirty-one-year-old Sarah Bryan is surprised and confused when she wakes up in a medical exam room with no recollection of how she got there, but the real shock comes when she learns that she has been cryogenically frozen for hundreds of years and she is no longer on Earth.

Ralnar Rowardennan, the huge, handsome alien astro-archaeologist who found and rescued Sarah, takes it upon himself to care for her. He does his best to help her adjust to an unfamiliar world, but when Sarah’s impetuous behavior puts her in danger Ralnar does not hesitate to put the beautiful little human over his knee and spank her soundly.

Though she has always longed for a firm but loving daddy, Sarah quickly realizes that being a good girl is much more difficult than she expected, and she soon discovers that naughty girls get their bottoms punished both inside and out. No matter how thoroughly and shamefully she is chastised, however, Sarah delights in being held and comforted afterwards, and when Ralnar takes her in his arms his masterful lovemaking is better than she would have ever imagined.

Over time, Sarah begins to find a place for herself in this strange new world, and with each passing day she falls deeper in love with her stern, sexy alien daddy. But when memories of her past suddenly resurface, will the painful revelations tear her away from Ralnar forever?

Publisher’s Note: His Little Earthling is a stand-alone book which is the second entry in the Twenty-Fourth Century Daddies series. It includes spankings, sexual scenes, and age play. If such material offends you, please don’t buy this book.

“Okay, fine, I get it; you’re spanking me because I didn’t do as you said!” Her voice was barely audible now over the fast succession of loud swats, then Ral stopped spanking her. Sarah was pleased she’d convinced him that she didn’t need any more spanking.

A few seconds later, something solid rapped sharply on her sit-spot and she yelped in surprise at the unyielding hardness of it.

“I thought it was over! It should be over!” She tried to kick free again because she was sure she didn’t want more of that hard thing.

“It will be over when I decide you’ve learned your lesson. By the amount you’re arguing with me, that’s not going to be any time soon.” He brought the hard thing down again and she yowled like a startled cat.

“What the purple fuck is that?”

“It’s just a wooden spoon I keep in the kitchen drawer. It’s made from Cerulean hardwood, so it produces a very satisfying result. And since you’ve been warned about swearing already, I’ll show you the main advantage of using a spoon instead of my hand.” He pulled her cheeks apart and landed the hard spoon on that area of her butt cheeks right beside her puckered hole, making her howl as he did it again on the other side.

“How is that an advantage? What’s wrong with you?” she demanded in surprise, as she tried once more to twist out of his grip. She cursed her stupid panties for being tangled around her calves as she tried to elbow him instead. It was so sore when he spanked her there, and felt so much more intimate.

“This can always get worse, young lady. If you continue fighting me, I’ll make you hold your own bottom cheeks apart.” The idea of having to actively participate in her punishment was horrifying, and she stopped struggling.

The skin around her bottom hole was a lot more sensitive than the rest of her bottom, and as he continued to spank her there, the sharp pain made her claw at the rainbow floor. She was furiously humiliated that he could see her rosebud as he continued to punish her in her most intimate and shameful place.

She had just about come to terms with that when he landed a particularly nasty swat directly over her bottom hole. She shrieked in surprise as her entire bottom seemed to tingle for a moment. Every time she thought this couldn’t get any worse, he found a more sensitive and humiliating place to land that evil spoon. What was worse, she could feel her clit throbbing as he swatted her bottom hole again.

As she began to cry, he returned to spanking her sit-spot, and she sobbed over his knee from the embarrassment as much as the pain. She wished the ground could just open up and swallow her about now. Had he seen her clit, engorged and pulsing? Was her slit wet from this? It was too much to imagine him looking down at her right now and seeing how her body felt about this spanking. He moved the spoon down to the sensitive area at the top of her legs and she howled and tried to kick through her tears. By that point, Sarah felt pretty bad about what she’d done.

“Go and stand in that corner, Sarah, and don’t even think about pulling your panties up.”

2017-06-17
Chris
Previous: The Dragon’s Captive by Loki Renard
Next: Protecting His Runaway by Measha Stone