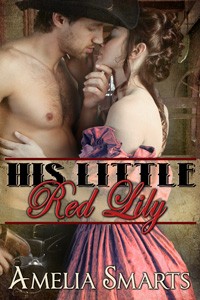 Lily has dreamed of performing on stage since she was a small child, and at the age of eighteen she approaches Jesse, the owner of the local saloon, to ask for a job singing and dancing for his customers. Lily has been secretly in love with Jesse ever since the day he took it upon himself to comfort her when she was in tears one day in town, and that only makes it more painful when he refuses to hire her, telling her that a saloon is no place for a sweet, innocent girl like her.

Determined to convince him to change his mind, Lily returns the next day. Within moments of stepping through the doors of Jesse’s establishment, however, she finds herself pulled over his knee for a good, hard spanking followed by an embarrassing scolding and a stern warning never to set foot in the saloon again.

Though Jesse tells her to forget about both him and the saloon and find herself a proper, respectable husband, he cannot keep Lily off his mind, even after she takes his advice to heart and begins courting the town’s self-righteous preacher. The situation comes to a head when Jesse catches the preacher in the midst of a vicious crime against one of the saloon girls.

Terrified for Lily’s safety, Jesse takes matters into his own hands and informs her of his feelings for her. He makes it clear that he considers it his duty to provide her with both the love and attention she craves as well as the firm discipline she has needed for so long. But with her former suitor bent on revenge and trying to run Jesse out of town, can he keep his little Lily safe and keep the saloon in business at the same time?

Lily rushed to follow him, giving him reasons for why he should hire her along the way. “I’m hardworking, honest, and I can serve drinks just as soon as I learn the names for the beers and spirits.”

“Mm hmm,” he said, opening the door to his office. When they both were inside, he closed it firmly.

He glared at her before he grabbed an armless wooden chair from behind his desk, planted it in the middle of the room, and sat down, hauling her over his lap as he did. He tossed up her dress’s skirt and petticoat.

“You’ll be doing a song and dance all right. Over my knee.” He planted a flurry of swats on her drawer-clad bottom.

Lily was too stunned to react until he paused the spanking. She gathered some of her wits. “What are you doing, Jesse?” she cried, equal parts embarrassed and outraged. She tried to stand up, but he pinned her against his leg with his left forearm and pushed her forward so that her bottom was even higher in the air. She laid her palms flat on the floor to balance.

Jesse resumed the spanking, lecturing as he did. “I think it’s fairly obvious what I’m doing. You’re going to learn a lesson today, one you won’t soon forget.”

Lily’s mind raced, still not comprehending that this was really happening. She thought it was possible that Jesse would give her a few smacks on the way out the door again, but she didn’t guess that he would take her over his knee. She’d never been spanked before, not like this, but she’d often imagined what it might be like to know someone who cared enough to spank her. She’d even imagined being disciplined by Jesse ever since that day he noticed her by the blacksmith’s shop. Unfortunately, the reality of punishment was much more painful than any of her fantasies.

She heard his stern voice in the midst of her discomfort. “You’re the daughter of a respectable farmer, very far from poverty or a desperate situation. What in tarnation are you thinking, trying to be a saloon girl? The gals here have no options. Most would love to be in your shoes.”

Lily squirmed and tried to roll off his lap. “Ow, ow, ow!” she yelped at the three hard swats that followed her attempt to escape.

“That’s right. Ow. You stay still for your punishment, Lily, and you pay mind to how much this stings. You certainly didn’t pay mind to what I told you yesterday. Instead, you behaved like a stubborn little girl in need of a spanking. Isn’t that right?” Jesse brought his hand down on the lowest part of her bottom again and again.

“I’m not a little girl,” she squeaked, aware of the irony of making that statement while being spanked over a man’s knee.

2016-03-26
+admin
Previous: Scarlet’s Scandalous Secret by Maggie Carpenter
Next: Mated to the Warriors by Grace Goodwin