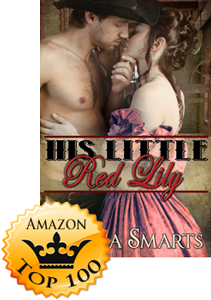 ★★★★★ Stephanie Cain “If its by Amelia Smarts, buy it now.”  on March 26, 2016
As always, Amelia Smarts offers us a heroine with substance and gumption and a hero worthy of her. The story involves a legendary saloon songbird, a hypocritical abusive preacher, and a protective barkeep. (He actually owns the saloon- but how often do I get to type the words”barkeep”? One of the nice things about the book is that the narrative is complex. Although Lilly is very young her romance grows her up. We see her blossoming and maturing. Our heroine has agency- she makes decisions, some good, some bad and in the end the rescuing goes both ways. And the spanking and love scenes….. yeah. …THOSE……

★★★★★ SH @ Amazon.com “Loved this book!! Don’t miss it!” on March 28, 2016
I so loved this book and I read it straight through! I just could not put it down until I finished. Lily just pulled at my heart and Jesse, once he acknowledged his feelings, was perfect for her. Their romance blooms and even though the journey has some bumps in the road it was a wonderful ride! Don’t miss this!

★★★★★ Redrabbitt @ Amazon.com “YOU’LL BE DOING A SONG AND DANCE ALL NIGHT” on March 30, 2016
I enjoyed this story with delightful characters and situations. Lily loves to sing and dance and is determined to entertain. She is bold enough to enter the saloon co-owned by Jesse and ask him for a job but instead is escorted out told not to return. After several attempts, he tells her she needs to find a nice man to court and marry. Sometimes, those so-called nice men are actually wolves in sheep clothing and have an evil and dangerous side. “The whole town is learning a lesson about judging a man based on his occupation.” The plot kept me captivated with Lily and her determination and spunky ways and Jesse and his dominance but the protection of Lily. Jesse realizes early on that Lily is craving dominance and a feeling of security that you would have from a loving father. The dialog is entertaining and heartwarming. I love that it has a happily ever after ending. Disclosure: I received an e-copy of this book in exchange for an honest review. All thoughts, opinions, and ratings are my own.