His Little Troublemaker by Emily Tilton 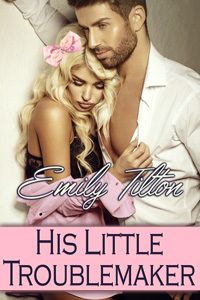 After twenty-one-year-old Cynthia Beaman is falsely accused of causing a serious traffic accident with a police officer, her situation appears almost hopeless. She’s been caught on the wrong side of the law more than once in the past, and with a corrupt judge ready to throw the book at her it seems that a long jail sentence is a certainty. But everything changes when a local reporter believes Cynthia’s story and convinces hotshot attorney Daniel Garcia to take her case.

As a former Marine combat pilot, Daniel isn’t one to back down from a tough fight, but he makes it clear to Cynthia right away that if she wants his help she’ll be expected to do as she is told. In order to ensure that his new client doesn’t get herself into any more trouble before he can clear her name, he insists that she move in with him during the trial.

Living by someone else’s rules isn’t Cynthia’s style, but when she pushes Daniel too far she quickly finds herself over his knee for a painful, embarrassing bare-bottom spanking. The humiliating chastisement proves to be just the beginning, however, and soon the stern, handsome lawyer has taken on the role of a firm but loving daddy for his beautiful, unruly client.

Though it makes her blush to be bathed, dressed like a little girl, and spanked soundly every time she is naughty, she cannot help longing for Daniel to claim her completely. When he takes her in his arms at last, his skillful, dominant lovemaking satisfies her more deeply than she would have thought possible, but can their budding romance survive the stress of the upcoming trial?

“You were trying to sneak out. Maybe just go down the street to a bar and have a drink.”

Had he just read her mind? She shook her head wildly.

“You needed to test me.”

Cynthia felt her eyes go wide. He knew, somehow: he really just… understood, apparently. What he understood, she couldn’t say, but she knew it had to do with… with what little girls need. Oh, God.

She shook her head again. “No! Seriously, I…” Once again, her brain stopped working.

What happens to little girls, when they break the rules Daddy made for them?

“I have to punish you, Cynthia,” Daniel said. “I have to teach you a lesson you won’t forget. Take off all your clothes.”

Oh, God. “What? Why?!” But she knew exactly why: somehow she knew, without being able to put it into words—and now she felt absolutely desperate to hear the words he would say, to help her understand what she knew. Bare. Naked. Ready for Daddy to punish you.

“Young ladies who test the boundaries the way you just did lose their right to privacy. Being naked for your whipping will help you learn to obey me. Now that I’m in charge of your well-being, I have to make sure you know that I’m charge of all of you—no secrets, no hiding. You’ll be naked for punishment when I decide you need to be naked, for your own good.”

He delivered the shameful speech in a calm voice, though one filled with authority. Cynthia could tell that if she didn’t do as he said, take off her clothes right now, while he watched, she would feel his hands on her again, just as she had the night before. He would rip her clothes off, then take off his belt… Oh, no. He said ‘whipping.’

“Yes, Cynthia. I told you this morning that that would be the consequence of repeated misbehavior. I’m going to start you out over my lap, like the naughty little girl you deserve to be treated as, but then you’ll bend over the couch arm and get the belt. The belt is for older girls who can’t control their behavior. As far as I’m concerned, you’re both, tonight.”

“But…” She really needed to know something else, but she didn’t know if she could even find the words, let alone utter them. Her eyes went to his waist, where his belt buckle made the heat come to her cheeks, for some reason. “But will you…” She swallowed hard. “Will you give me a hug, afterward?”

For a moment, she couldn’t read his expression at all; he seemed to struggle with some unknown emotion. Then a smile broke out on his face. “Of course,” he said. “I’ll give you a hug now, too, sweetheart, if it will help.”

He opened up his arms, and although she didn’t understand why it should be so, Cynthia’s heart leapt and she ran to him eagerly. The feeling of those strong, bare arms around her, and the feeling of her cheek pressed to his muscular chest seemed to blend the need she suddenly felt down below her tummy with the new need she felt in her heart.