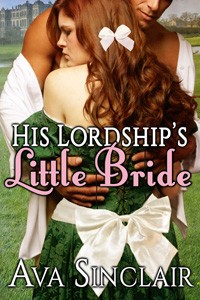 Eighteen-year-old Lady Amelia Chesterfield’s willfulness has caused great consternation for her parents over the years, but they are nonetheless taken aback by her appalling and indecent response to their attempts to marry her to a man of their choosing. The scandal which ensues as a result of Amelia’s wanton behavior seems certain to complete the ruin of her family’s already tattered reputation, and thus it comes as a shock to the entire household when Garrett Darmley, the heir to the richest estate in the region, makes his own offer of marriage to Amelia.

Garrett is no fool, and he has his own reasons for his proposal. He has long known that he wants and needs a woman who can be not only his wife, but his little girl as well, and Amelia will fill that role perfectly. Her rebellious nature will afford him plenty of opportunities to bare her bottom and spank her soundly before taking her in his arms to comfort her, and if she persists in her defiance his young bride will soon discover that there are punishments which are far more painful and embarrassing than a mere spanking.

Though her new husband’s treatment of her is shocking at first, as Amelia settles into her new life as his little girl she finds herself feeling loved and accepted in a way she never dreamed of before. His total command of her body soon leaves her yearning for his touch, and as his masterful lovemaking brings her to one quivering, blushing climax after another, her passion for him burns hotter every day. But when enemies within Garrett’s own household seek to harm Amelia, will the scandal and disgrace she hoped to leave behind return to plague her once again?

She was easy enough to throw over his lap, and the sensation of her warm body stretched across his thighs was pleasant enough. But his mind was on one simple thing now—introducing her to what he suspected was the first bare-bottom correction of her life.

“What are you doing? How dare you!” Amelia’s hand shot back as she attempted to stop Garrett from pulling up the hem of her dress to expose the filmy undergarment covering her bottom. “Stop!”

But Garrett ignored her as he jerked at the fabric until the waistband slipped from underneath the corset and then lower still. When Amelia’s bottom was completely bare, he readjusted his grip around her waist, trapped her kicking legs with his own.

He took a moment to eye his target with appreciation. Her bottom was plump and round, with two charming dimples atop each cheek. The cleft was fine and deep, and while he could not see between her legs, he imagined her pussy to be just as delectable. She was already crying, although more from anger and outrage than hurt.

That was about to change.

“You are to be my wife, like it or not,” he said. “That means you will be obedient to my will and respectful of my station as your husband and guardian. In this house, disobedience to authority is met with a hard spanking. This is a consequence that applies to everyone from servants to members of the household. This will be your first lesson.”

The statement was followed by the crack of his hand and a yowl from the pretty miscreant over his lap. Had Garrett felt he had the time to savor this first spanking of his ward, he’d have stopped to watch the red imprint of his hand blossom across her fair nates. But this was about sending a message, and he spanked firmly and consistently as Amelia wailed and her pert, plump bottom reddened rapidly beneath his punishing palm.

“Oh, please, sir!” she cried, rocking back and forth to the extent she could over his thighs. “Please stop! It hurts!”

“Are you ready to be a good little girl?”

When she didn’t immediately answer, he tipped Amelia forward and began alternating crisp spanks to the underside of each cheek, eliciting a fresh wellspring of tears. The soft expanse of skin of that velvety crease between buttock and thigh was soon as red as that of her upper buttocks. Only when she wilted, limp and defeated, over his lap did Lord Darmley cease his chastisement.

2015-10-31
+admin
Previous: The Admiral and the Orphan by Chula Stone
Next: The Sergeant’s Claim by Emily Tilton