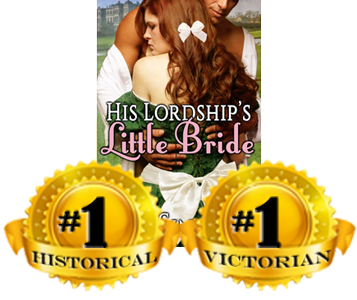 Ava Sinclair‘s newest title, His Lordship’s Little Bride, has claimed the #1 spots in both the Historical Erotica and Victorian Erotica categories on Amazon less than a week after its release. This is the sixth straight title from Ava Sinclair which has reached #1 in at least one category on Amazon. Congratulations, Ava!

★★★★★ Nicole H. Vela @ Amazon.com “Wild One!” on November 1, 2015
Lady Amelia Chesterfield, unrestrained, uncontrollable and uninhibited and the scandal that has just occurred has her family reeling! Her unceremoniously bedding below her station has her parents scrabbling. Enter the most eligible handsome scoundrel in the country, and being the richest also helps, but it’s the hungry look that has you wanting to bend to his will. Garrett Darmley has his own skeletons in his closet(as in get a chair type and wedge it shut). He wants an unconventional marriage, he wants a little and a ward and a wife…and perhaps down the road..well. Amelia never had love and she never had caring but this man will bring to her life love ,family and every emotion she has never felt. Cherished and adored, but when an outside source threatens it all, it’s up to the most unlikely person to help. Ava Sinclair continues her seduction, her readers are captivated with Victorian erotica unsurpassed bounds and its a delightful read. Each of her books are unique but this one has what I call an escape quality. To literally take you into the story, you live in the book it’s draws you in and you fall hard for the characters. Once again a fascinating,fabulous read by a truly gifted author! Bravo Ava Sinclair!

Lady Amelia is a spoiled brat used to getting out of doing anything she doesn’t want to do, because of selfish and lazy parenting–and this serves her well, until she has sex with a gardener, in order to get out of marrying a sickly, but wealthy titled man that no one else wants. Lucky for her (and her family), there is an alternative–marry a man who isn’t interested in a conventional wife. Dun dun dun!

The things I really enjoyed about this were that the “model” of the book was switched up, and we see the “Daddy” of the story with his family—and a very unconventional family it is. It plays on the idea of an arranged marriage of people who don’t hate each other, but don’t love each other i.e. want different things………. I also loved the inclusion of an older female, submissive/Little character–showing the rewards and pitfalls of someone who is secure in what she is and what she wants, and also the vulnerability of that, versus her age. It was very well done.

I now want a sequel/series, based on the family! I think that would be interesting to see……potential for a lot of naughtiness.

★★★★★ SH @ Amazon.com “Loved it!” on November 2, 2015
Another hot, historical AP book from this author and it was everything I have come to expect! Amelia hit the jackpot when she becomes betrothed and then married to Garrett Darmley, although it took her a while to realize it, in more ways than one. Her family life was awful with parents who really didn’t care about her desires for her life but all that changed with Garrett. His family was quite interesting and Amelia finds joy, security and love. I did feel quite sad for Lady Darmley, Garrett’s mother, during this story though. I would love to read a sequel…hint hint 🙂

I’ve had hours of scandalous enjoyment from all of Ava Sinclair’s books, and the books that she wrote as Elsa Black. If you love submission, Age play and Historical settings (I adore all the Victorian works especially) Then you’ll fall massively in love with all of her writing. Yummy!