His Lordship’s Mate by Jaye Peaches 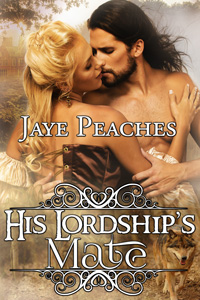 Eighteen-year-old Ella Bailey knows that if she is to have any hope of a good match, she must marry quickly before her father completes the ruin of her family’s fortune and good name with his wanton living. Her situation is made worse when a wealthy viscount expresses interest in her hand and she accepts his invitation to a party, only to have the supposed gentleman first seek to seduce her and then attempt to force himself on her.

After his efforts to despoil her are thwarted, the spiteful cad does his utmost to slander Ella’s character with scandalous accusations. With her reputation in tatters and nowhere else to turn, Ella seeks solace in the arms of the enigmatic Gethin Powell, a rich, handsome lord known for his lack of concern for the expectations of high society.

Gethin takes a strong interest in Ella, but he makes it abundantly clear that he is a man who expects to be obeyed in all things. Living under his roof as his woman will mean submitting to his authority, surrendering her body to his desires, and baring her bottom for his stern chastisement whenever he deems it necessary.

Ella soon discovers that Gethin’s sexual appetites are both fierce and insatiable, but as he thoroughly lays claim to her naked, blushing body, she is deeply ashamed to find herself hungering for more. But even as their passion for each other grows deeper, an old and powerful secret waits to come to light. When Ella learns the truth about Gethin, will it tear her away from the man who has taken her as his mate?

“Now, reach back and separate your cheeks.”

Ella’s fingers slid between them, finding the spot where her anus lay hidden and she opened up her cheeks, spreading them until her skin was pulled taut. The raw shame of such an act—to prise apart her buttocks and show him her puckered hole—inundated her.

“Move your knees a little farther apart and push your bottom up.”

She could just see his boots and she tracked his movements to the bed, where the nettles lay, then he returned to stand next to the kneeler. He’d plucked a leaf from a stem. “Oh, my lord, please, my poor bottom,” she wailed, before he’d even touched her.

She flinched, but then realised he was stroking her bottom with his hand, circling each lobe and the caresses calmed her thrumming heartbeats. He stilled his hand and it came to rest on the base of her spine. She took a deep breath and squeezed her eyes tight shut.

Gethin wiped the leaf up, from her perineum to upper end of her crack. As he passed over her twitching anus, he pressed harder. For a few seconds, she perceived nothing, then with a breath-taking suddenness, her bottom hole began to sting. The prickling sensation became sharper, more intense and she drummed her feet on the pedestal. She bobbed her head up and down, but Gethin’s hand weighed her down.

“Oh, my lord. It stings terribly,” she whined, desperately trying to wriggle her bottom. The stings multiplied, as if she was being pricked with a needle many times.

“You’re being very brave, Ella, but your punishment isn’t finished. The forest is not the place for you, not on your own. Six strokes of the stems.”

2015-12-12
+admin
Previous: The Barbarian’s Pet by Loki Renard
Next: Sentenced to the Punishment Clinic by Carole Archer