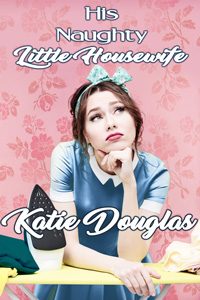 When Trent Wilson comes home from a long day of work and yet again finds the house a mess, dinner not ready, and his twenty-one-year-old fiancée Thea Daniels lazing about on the couch, he decides it is time to put his foot down. He informs his beautiful, naughty girl that for the next two weeks, she will live the life of a 1950s housewife. She will be completely obedient, and her chores will be done promptly and properly or her bare bottom will be soundly spanked.

Thea assumes Trent must be joking, but when he strips her bare and puts her in a pretty dress suitable for a demure, submissive housewife she begins to realize that he is serious, and after she tests him by disobeying a simple instruction she earns herself a stern punishment.

She quickly discovers just how much she has been neglecting her duties, and over the coming days Thea finds herself with a bright red, well-punished bottom on more than one occasion. Despite her frequently sore backside, however, she cannot deny how deeply Trent’s dominance arouses her, and when he takes her long and hard and then holds her in his arms she is reminded how wonderful it is to be thoroughly mastered. But can their new arrangement survive the distractions and demands of the modern world?

“Remember this, Thea?” Trent showed Thea a butt plug. It was the enormous one he’d used when they’d first started playing together, when he’d been training her ass to take his cock. It had been a while since he’d done anything with her bottom hole, she thought, and the idea of that huge butt plug filling her was slightly terrifying, just like the first time he’d worked it inside her.

“Will it fit, sir?” She couldn’t stop staring at it as she felt her ass opening slightly in anticipation. A trail of lube was making its way down the side of the plug.

“That’s what I’m going to find out. It wouldn’t be much of a punishment if we used the itty bitty butt plug, now, would it?”

Thea felt the tip of the cold, slick butt plug as it pressed against her, touching her insides, as he worked it deep inside her with gentle but unyielding pressure. She tried to temper her breathing as the butt plug stretched her ass wide open. A tiny moan escaped her lips as it found its place. It felt so big and before she could think about what she was doing, she reached her hand back to try to pull it out again.

“There. I knew my good girl could take that plug. You’re not going to remove that, unless you want a bigger one in there,” Trent warned. “Now turn around to face me; there’s something I want to put in your mouth.”

Thea turned and came face to face with his cock. She opened her mouth and let him in. Sucking his cock was one of her favorite things to do, because it always made him so happy. He roughly seized two handfuls of hair either side of her head, and he used them to control the pace, pulling her head deeply onto his cock then forcing her away from him until her lips barely touched the tip, then he pulled her back down the shaft so his cock was touching her throat. He did this a few times then changed to using her hair to steady her head while he fucked her face. It felt so good for Thea to have his cock inside her mouth, sliding against her tongue, while she squeezed her lips around it tightly and felt the hardness of it pressing against her palate. The salty, musky taste added to her arousal.

After a couple of minutes, he pulled out, and she kept her mouth open like a hungry baby bird, just in case he changed his mind and decided to let her have her mouth filled again.

“You sucked my cock very nicely; now I want you to turn around and show me your pussy and ass,” he instructed. She did so, feeling a trickle of wetness run down her thigh while she waited for him to pull the butt plug out, but he didn’t. Instead, he entered her with the plug still in her ass, and she murmured incomprehensible sounds in appreciation of this wonderful full feeling. Gently, he began moving inside her and she savored the way the plug made his cock press against her g-spot as he fucked her, gradually getting faster.

“Reach one of your hands back and play with your clit,” he told her. She moaned at the thought then lifted her right hand off the bed and moved it to her most sensitive place, where she gently danced two fingers over the soaked, slightly sticky area, while Trent fucked her harder with his cock and the butt plug. As she got close to orgasm, she decided to ask, “Please, can I come, sir?”

2016-11-05
+admin
Previous: Libby Learns Her Lesson by Dinah McLeod
Next: The Correction Academy by Samantha Madisen