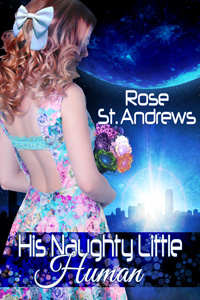 After sleeping with a co-worker in order to win the post of diplomatic ambassador to the planet Nitzan, twenty-six-year-old Charlene is quite proud of her resourcefulness. But when her new assignment starts off with a highly embarrassing medical examination, she begins to wonder if she has bitten off more than she can chew.

Her fears are soon confirmed when she learns that, as a result of differences in the measure of time between the two worlds, she is going to be treated as a teenager while on Nitzan. She’ll even have a guardian—a scientist named Qwin—who seems intent on caring for her very thoroughly. Qwin resembles a handsome human man, but due to size differences between their species he towers over Charlene, leaving her feeling like a mere child in his presence.

Charlene’s complete lack of preparation for life on Nitzan soon comes back to haunt her when her ignorance of local laws results in her inadvertent desecration of a revered shrine. After a sound spanking carried out on a judge’s orders, she is sent to school to be taught what she neglected to study back on Earth.

Worst of all, when Qwin discovers the less-than-honorable way she obtained her position, he informs her that a series of painful and humiliating punishments will follow. Yet despite her fury at being treated in such a shameful manner, Charlene cannot ignore her growing attraction to the firm-handed alien who puts her in her place as no one ever has before.

“Qwin, is her positioning across your lap also standard?” Wilmet said.

“Correct, it is what is known to humans as the OTK, over the knee or lap configuration. They typically use it for disciplining a wayward child.”

“You are a limited adult, Charlie, and thus the position is appropriate,” he scolded. “Furthermore, it is the easiest method for Kaylor and Wilmet to utilize. Now hush and take the punishment you know you deserve.”

Fortunately, Qwin ended the spanking a few minutes later. Unfortunately, that wasn’t the end of her misery. He asked for a garment removal device, and before Charlie could articulate an objection, she was naked across his lap. She covered her face with her hands, pure mortification rippling through her, and she didn’t need a mirror to know her face was as red as her ass. Lying there, held firmly in place by Qwin, the ladies moved closer to inspect the results of his efforts.

“Note the redness and increased heat from her dermal layer,” he said casually.

“Qwin, inquiry,” Wilmet said. “Does this procedure not impair her ability to sit?”

“It does indeed, which is a further assistance in its effectiveness. Charlie is reminded of the spanking—or other punishment—for a considerable time following the event, and her behavior tends to improve in an exponential fashion. Now, if the punishment is particularly severe, she can be allowed to stand, as sitting is extremely difficult for at least half a day.”

It was several more minutes before she was given new clothes and then she and Qwin departed. On the way home, he scolded her again about her studies. She felt all of about twelve, and squirmed in her seat due to the blending of sore bottom and humiliation. Once home, Qwin sent her to her room to study. He made it clear: no games until all her schoolwork was complete. Charlie went to her room, shed her clothes, and flopped on the bed. A multitude of sensations rippled through her mind and body. Lying there on her stomach, she reached back to lightly caress her poor backside. She closed her eyes as the images and sounds of earlier caused her breathing to speed up, sweat to trickle across her supple flesh, and blood to surge within her.

She was turned on, and she didn’t know why. It seemed the more her ass cooled, the hotter her inner core became. Sliding across the bed, she kept caressing and kneading her behind with one hand while the other thrust and jabbed deep into her pussy. Pure delight rippled through her brain, building and building. Her back arched, her hands worked their magic, but then the door flew open.

“Charlie, are you all right?” Qwin blurted out.

2015-06-05
+admin
Previous: The Soldier and the Widow by Chula Stone
Next: Buying His Mate by Emily Tilton