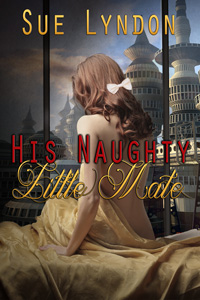 As an astrobiologist fresh out of graduate school, Carmen jumps at the chance for a journey to the red planet to search for signs of ancient alien life. What she didn’t bargain for is Command Pilot Erik Manning, a tough, no-nonsense military man whose authoritative presence always sets her on edge. But her issues with Erik quickly take a backseat when a disastrous explosion during a spacewalk leaves both of them floating amidst the debris with little hope for survival.

After a white flash of unknown origin suddenly renders them unconscious, Carmen awakens in a strange room that seems to be a cross between a nursery and a medical facility. She quickly discovers that her alien rescuers don’t understand human biological development—in particular the fact that Carmen is a highly capable, adult woman—and she is thoroughly humiliated when her caretaker feeds her, puts her in diapers, and spanks her when she resists such treatment.

Even worse, Erik believes that the more they cooperate with the aliens, the better their chances of returning to Earth one day, and he promises to punish Carmen himself the next time she misbehaves. But after she defies his warnings and ends up over his knee for a long, hard, bare-bottom spanking, her eventual surrender to his discipline alters the nature of their relationship forever. When he discovers Carmen’s yearning to be loved and nurtured by a firm daddy, Erik takes to the role whole-heartedly and delights in treating her as his little girl.

The aliens, meanwhile, are intrigued to learn that humans still procreate naturally. In return for the opportunity to observe human mating habits in detail, Carmen and Erik are promised safe passage home. After a series of intimate, embarrassing medical examinations, Carmen finds herself both blushing with shame and trembling with desire as she submits to Erik’s passionate, dominant love-making in full view of an enthralled audience. But will the aliens uphold their end of the deal, or are Carmen and Erik destined to remain captives for the rest of their lives?

Erik stood at Carmen’s side as she lay on the medical table, naked and covered with a thin white sheet. She was shaking, and he ached to calm her nerves. He watched as the two alien physicians, females named Erra and Stee, prepared the room for her examination, setting out instruments on a sterile table. They’d examined him earlier, running a few tests they said were necessary to make sure nothing in the environment on Vella would adversely affect them or a developing fetus. As soon as Carmen became pregnant, they would be free of this facility, and the Blumerans wanted to make sure their planet was safe for humans. Of course they also wanted to more thoroughly examine their sexual organs and observe the changes that occurred in a human during arousal.

Erra and Stee both turned, their communication necklaces swinging around with their movements. Both women were tall with dark hair, their appearance so similar that he wondered if they were related. As they approached the table where Carmen lay, her shaking increased and she gave a small whimper.

Smoothing the hair from her face, he leaned down to whisper words of encouragement and comfort in her ear. “It’s going to be okay. We talked about what would happen here today, so there will be no surprises. They are going to examine you, and I will be here the whole time.”

“How many Blumerans are watching me right now though? I saw the wall shimmer briefly when we walked in. I know they’re watching me through a window or something.”

Erik had seen the same shimmer of blue along the wall, but he’d hoped she hadn’t noticed. Even if he hadn’t seen the window, he would have suspected her examination was being recorded or observed by others besides the two female physicians. He suspected the examination they gave him this morning had been observed as well, but he’d decided not to dwell on it. He patted her arm. “Just try not to think about it, and behave yourself and this will be over quickly.”

She exhaled a shaky breath and blinked up at him. “But what about the last part, you know, when they need to…” Red blossomed across her face and she bit her lip, unable to complete her sentence.

“You mean when they need to observe your ‘state of female human sexual arousal’?” he asked, quoting what Nuemis had explained to them.

“Yes, that,” she whispered, casting a worried glance at Erra and Stee.

“That will be the fun part, little girl. I promise. I’ll be the one touching you, the one stroking your pussy until your clit is nice and big and throbbing.”

Her breath caught, and he stepped back to allow Erra to place a monitor of some sort on her head, while Stee affixed something similar to her left hand. Next, Erra held a scanner over Carmen’s abdomen for several minutes, moving it around in a slow circle while Stee watched intently. The alien women spoke little, the same female voice emanating from their necklaces only when they needed to give Carmen or Erik specific instructions, such as for Carmen to spread her legs or for Erik to step back for a moment.

Once the scan was complete, Stee motioned at the thin white sheet covering Carmen. “It is time to observe her state of human female arousal. The sheet must be removed.”

It was time for Erik to take over the examination. He gazed down at his sweet little Carmen as the alien women moved a few steps back.

“How are you doing, Carmen?” he asked.

She shrugged on the table. “Oh, just fine and dandy. I’m about to get felt up while aliens watch. Please just make it quick.”