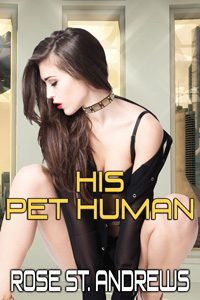 Though twenty-four-year-old Crystal didn’t have much going for her on Earth, she is still none too pleased about being abducted by aliens set on using her as a test specimen. Naked and on display, she is examined thoroughly and subjected to one humiliating procedure after another.

To make matters worse, the aliens can’t understand her language and don’t seem to realize that humans are an intelligent species. Only one of them recognizes the truth, and he decides to hide Crystal from the others and keep her at his home as his pet. When he discovers that she has disobeyed him and gone exploring, however, he bares Crystal’s bottom for a thorough spanking.

Despite her embarrassment, the punishment arouses Crystal intensely, and when her new master takes her in his arms his dominant lovemaking is better than she would have ever dreamed. But when a woman of his species falls in love with Crystal’s owner, will her presence leave Crystal feeling excluded or can she put aside her jealousy and find happiness as their shared pet?

Publisher’s Note: His Pet Human includes spankings and sexual scenes. If such material offends you, please don’t buy this book.

Before she could form any sort of response—smack! His hand struck. It wasn’t too hard, but it was firm, and it was truly humiliating. He then set up quite the steady rain of swats and spanks to her bare cheeks, and it wasn’t long before she was yelping and squealing. Her legs kicked, her fists pounded, and she promised him anything he wanted if he’d just stop. Of course, none of it meant anything to him, and he just kept right on spanking and scolding her.

“Gem, do you understand? I will not tolerate disobedience from you. There are so many reasons you must do as I tell you. It’s not just that you’re a pet, there’s the fact that you’re not supposed to be here, remember? If you’re found, it’s off to the zoo. Is that what you want?”

She made a fist with her pinky raised, their gesture for ‘no.’

“Good, because I sincerely hope this type of discipline will not be needed from now on,” he said, giving her a final couple of solid smacks. “Now, you… let’s see, ah, I know, stand in that corner there while I finalize my report. It’ll keep you out of my way.”

Easing herself down from his lap, she rolled her eyes. She couldn’t believe it, he’d hit on her mom’s favorite punishment. Cupping her tender cheeks, she nodded and moved to the corner to stand and lightly rub. For someone new at spanking, Ibis was good at it. He clicked away on his pad for several minutes, all the while her embarrassment growing. Yet, she had to admit, she did deserve a penalty for causing such troubles for him, and she felt better now that they’d cleared the air. She was also optimistic that he could convince the others that she wasn’t a dumb animal. It was the first step in getting home.

“All right, Gem, you can get dressed now. I’m going to the lab to present my findings. Can I trust you to stay put in the house and not get into trouble? If not, it’s in the cage with you!”

2017-09-02
Chris
Previous: Chosen by the High Judge by Jaye Peaches
Next: Taming Their Pet by Sara Fields