His Pet Princess by Loki Renard 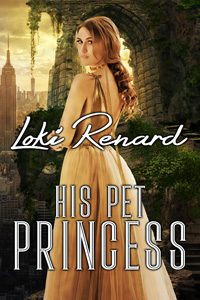 When twenty-year-old Princess Sabine discovers that her father plans to marry her off to a cruel, heartless general, she flees through the world gate, and what she discovers on the other side is unlike anything she has ever seen. But Sabine is an outsider in this land of towering buildings, advanced technology, and vast multitudes of people, and she soon finds herself in grave danger.

As the guardian of the gate, Maxim’s orders are simple. He must track down the princess and bring her home. But then the ancient portal is suddenly destroyed, leaving Maxim and Sabine trapped on the other side, and he quickly realizes that if he is going to keep the beautiful, headstrong princess safe, he is going to have to take her firmly in hand and teach her to obey.

Sabine is shocked to learn that under the laws of this realm, she will not be a free woman. She will be a pet, the property of her owner, and that owner will be Maxim. Soon enough, she is wearing nothing but a collar and tail as she kneels at her master’s feet with her cheeks blushing and her well-punished bottom sore both inside and out. But when the gate is repaired and opened once more, will Maxim and Sabine end up at the center of a war between two worlds?

Publisher’s Note: His Pet Princess includes spankings and sexual scenes. If such material offends you, please don’t buy this book.

He let out a grunt of pleasure and pulled his cock free, pulling it all the way out and then plunging it back in. She could hear her pussy making embarrassing wet sounds with every stroke. She was soaked with juices, her arousal flowing so freely it slicked her inner thighs.

“This hole is starting to adjust, pet,” he murmured down at her. “Your tight little cunt is beginning to love your master’s cock.”

He spoke so crudely, and she knew it was on purpose. Every time he said such things, her pussy squeezed his cock harder, her inner muscles reacting to his words. She did not know why her body responded so powerfully to him, but it hardly mattered. What room was there for thought when her entire being was under his control?

Maxim pushed that thick rod back inside her so slowly her toes curled with the tantalizing sensation of being filled, then he pulled it out and she felt it slide against not her slick slit, but the tight little star above it.

She gasped and jerked forward, her collar preventing her from going very far as the chains went taut.

“Easy, pet,” he murmured, pressing the head of his juice-slicked cock against her anus. The tender little spot tightened immediately in an effort to keep the invader from breaching her rear defenses, but Maxim was not trying to push inside. Not yet, anyway. She could feel him toying with her bottom, the head of his cock hot and hard against that place.

“Oh, I absolutely can,” he growled, leaning down over her. She felt his cock at her bottom and his mouth on her neck, kissing and nipping and then catching her nape in a possessive bite just above the collar. It did not break the skin, but it was hard enough to make her yelp and in that moment of gasping sensation the very tip of his shaft slipped into her previously untouched rear. He was far from penetrating her properly, but she felt the tight ring give way a little and knew that should he so desire he could thrust himself deep into her bottom the same way he had taken her pussy.

He held himself firm there, letting her feel what it was to be conquered, utterly vulnerable beneath a man with ferocious lust. Her soft whimper accompanied his slide away from her rear. He was showing her mercy, for a moment. Sabine heard him get up and cross the room. She heard running water and the sound of washing and then he was back, kneeling behind her again.

She braced herself to feel his cock pushing inside that impossibly tight hole, but he did something different this time. Instead of hot flesh, she felt a cool gel at the very bud of her bottom. Her little curious whimper made him chuckle in that resonant way that made her feel warm to her very core.

As scary as he could be, as strange as the things he was doing to her body were, as far as he was pushing her into levels of sexual depravity, she knew instinctively that she was safe. He was in control and he was looking after her, even now as his finger swirled against her winking bottom, pushing further forward than his cock had.

Slowly she felt her rear give way to the intrusion, his finger plunging into her bottom with a gentle but insistent motion, twisting through the cool lube that was warming with her body heat and becoming even slicker and more slippery. The feeling of being penetrated there was strange, not unpleasant, exactly, but perhaps not pleasurable either? Though there was a thrill, a tingle, at the knowledge that she, Princess Sabine of Ere was chained down and her bottom intruded upon by a large man who had been whipping it since he met her.

As he slid his finger deeper, past the first knuckle and through to the second, the sensation grew and with it, the pleasure. Her clit and pussy were now entirely empty, ignored for the moment. Having him play with her in a much more forbidden place made her pussy clench as if desiring a cock that was not there. He was withholding it from her, making her take his finger in her ass instead. Her hips slid back with a tentative seeking motion, eliciting another dark chuckle from her captor.

“I think my pet princess likes this,” he said, slapping her left cheek with his free hand.