His Rebellious Mate by Morganna Williams 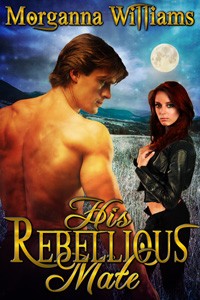 Nineteen-year-old Maggie Treenan, the youngest daughter of a human mother and a Ramelian commander, is certain that her brothers’ best friend, Jackson Marks, is destined to be her mate. Unfortunately for Maggie, however, Jackson sees her as nothing more than a sweet but silly girl, and when she throws herself at him to convince him otherwise she only manages to earn herself a stern scolding and a painful, embarrassing bare-bottom spanking.

To make matters worse, his chastisement triggers her mating fever just before he leaves Earth to return to his post with the Ramelian Guard. Heartbroken and overwhelmed by her unmet need for the man her body knows full well is her mate, Maggie spends the next eight years running a biker bar, riding motorcycles, and doing her best to forget about Jackson.

When he returns to Earth at last, it doesn’t take long for Jackson to figure out what has happened. Realizing how difficult it must have been for Maggie to live for all those years with the fierce, inescapable lusts of her mating heat—lusts that only he can quench—he sets out to claim her properly and make things right as soon as possible.

But Maggie has grown into a feisty, headstrong woman, and Jackson soon realizes that taming her is going to be no easy task. He will need to be loving, but he will also need to be firm, even when that means punishing her thoroughly for her stubbornness. Will his rebellious mate learn to submit, or will she find herself spending most of her time with blushing cheeks and a bottom that is sore both inside and out?

She lay there for a while, thinking about the situation. Her body was burning with need, her clit swollen and throbbing, needing release. Maggie knew it would take little to no time at all to bring herself back to the brink and topple over the edge. Jackson would never know.

Her hand moved down beneath the covers almost of its own volition, her fingers gliding through the wetness and into her empty core. Maggie’s head arched as she began working her fingers in and out hard, her palm rubbing over her clit with every stroke. It felt so good.

As her fingers began moving faster she moved her other hand down to rub her clit in a circular motion and then her body clamped down as the orgasm that had been hovering beneath the surface broke free and she came hard with a little scream of pleasure.

“What a naughty little mate I seem to have,” Jackson said from the doorway.

Maggie yelped in surprise and sprang up in the bed.

“I’d hoped we wouldn’t need this so quickly but I was bringing it anyway to perhaps help you to obey,” he said, holding up a large tubular-looking root.

“Mandavalian spice root. It works a little like ginger on earth. A good spice added to food but also a good way to punish a naughty little mate,” he explained as he pulled a knife from his pocket and peeling away the outer skin until he was left with a long, fat, phallus-like purple root.

“What are you planning to do with that?” Maggie asked warily.

“I’m not going to do anything. You are,” Jackson told her as he moved a chair to the foot of the bed and beckoned her to him.

She frowned in confusion. “What do you mean?”

Maggie felt her face flush hotly and moisture welled again between her thighs as she remembered what she’d read about ginger and the practice of figging on Earth. She licked her lips. “But that will burn.”

“How long will I have to…” she asked, waving a hand nervously in the air.

“Until you come,” he said succinctly.

2016-02-27
+admin
Previous: The Secret School for Little Girls by Rose St. Andrews
Next: A Wife’s Correction by Emily Tilton