His Sassy Spitfire by Chula Stone 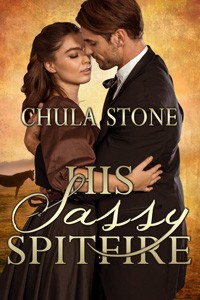 Twenty-two-year-old Addie Pardue is deeply in love with her fiancé, Jarod Newgate, but she finds it difficult to be happy with her own life while her sister remains married to Amos Longstreth, a despicable man who cheats on her and treats her horribly. As much as she hates Amos, however, the last thing she expects is for him to turn up dead on Jarod’s property.

Though she is certain Jarod is innocent of the murder, the fact that Addie witnessed a fistfight between him and Amos just a few days prior to Amos’ death is not going to look good in the eyes of a jury. Desperate to protect the man she loves, Addie agrees to marry Jarod right away, thus preventing herself from being compelled to testify against him.

Despite the unusual circumstances of their wedding, Addie quickly discovers that her new husband will not hesitate to take her in hand, and her fiery temper and penchant for disobedience earn her a good, hard, bare-bottom spanking on more than one occasion. But with the Longstreth clan set on revenge and Addie set on proving her husband’s innocence no matter the cost, can Jarod clear his name and rein in his sassy spitfire before it is too late?

Publisher’s Note: His Sassy Spitfire contains spankings of an adult woman, including domestic discipline in a historical setting. If such material offends you, please don’t buy this book.

He tugged on her wrist and she reluctantly complied. “Jarod, really! This isn’t necessary,” she argued pertly. It was hard to keep up her rebellious attitude as he flipped her over his knee, but she did her best.

“Didn’t I let it slide when you barged into that jail and sassed every authority there?”

“And I was patient when you threw a book at a lawman.”

“I threw a book at your best friend.” Addie tried to stand up, but he deftly flipped her over again and clamped one immovable arm over her waist, pinning her to his lap.

“But only because he was a lawman. Didn’t you know that if he had come to stop us, we would have had to give up on the plan? I told you it was his idea in the first place.”

“Well, he didn’t seem very happy about it. I thought he had changed his mind.”

Jarod obviously wasn’t paying any attention to her reasoning. His hands were busy keeping her in place and moving her clothes out of the way. “And if he had, I would have felt obliged to do things his way, but he stuck his neck out to help us and you tried to run him off! You wouldn’t listen when I told you to come down with him. But I let that go, too. With this afternoon’s stunt, however, you’ve gone too far. I see now that I can’t give you an inch, so I’ve decided I’d better give you the ruler.”

“No, Jarod, not that!” He had used it on her before, over her petticoats but it had still stung. Lying over his lap like this, with her bare bottom on display, she couldn’t stand the thought of that thick old ruler of her father’s striking her tender backside.

“Yes, that. But I can tell you’re not ready to fetch it like a good girl, so I’m going to start like this.” She didn’t have to wonder long what he meant. His hard palm smacked down on her bottom with all the fervor of a new and passionately indignant husband.

He had never spanked her on the bare before but she had been under no illusions how it would feel. She had known it would hurt even worse than his chastisement did when he left a petticoat down to protect her modesty. Now she was his and nothing shielded her secrets from his sight… or his ire. The heat and sting built twice as fast as they ever had. “Ouch!” she squealed, all her efforts to remain silent proving vain. She couldn’t hold back her cries as he peppered her bottom with swat after stinging swat.

As she shifted and squirmed, he spanked whatever portion of her rump was uppermost so that soon every inch of her bottom was in flames. “Just tell me when you’re ready. I’ll let you up so that you can fetch the ruler.”

2016-04-09
+admin
Previous: Claimed by the Captain by Gracie Malling
Next: Corrective Treatment by Loki Renard