Don't Miss
Home / Blog / His to Claim by Kallista Dane

His to Claim by Kallista Dane 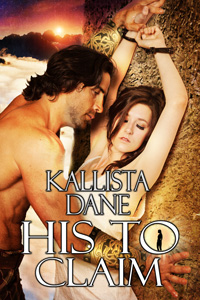 After a newly rediscovered device for interstellar travel malfunctions drastically, biologist Alexis Sims ends up stranded on Iridia, a planet thought to have been rendered lifeless by terrible warfare centuries ago. To her surprise, Alexis soon discovers Iridia is home to a hardy tribe of warriors—primitive savages, to her eyes—who have found a way to survive on this harsh world. Ayron, a tough, skilled hunter, rescues Alexis and brings her to an underground city.

Once there, it rapidly becomes apparent that her place in this society will be quite different from what she is used to back on Earth. When she resists being stripped and bathed, she is held firmly over Ayron’s strong thighs for the first spanking of her life. Then after a thorough, intimate examination demonstrates her suitability as a mate, Alexis is turned loose in the outlands. The hunter who captures her will win the right to publicly lay claim to her in front of the entire city.

Though Ayron is undoubtedly the mightiest of the hunters, since the tragic loss of his family he has lived in grief. But when he comes upon Alexis naked in a cave, cowering before one of the most brutish men of the tribe, instinct wins out and he fights for her, defeats his foe, and takes her as his mate.

Despite her shock at his primitive ways, Ayron’s raw masculinity and utter dominance excites Alexis beyond anything she’s ever known, and soon she is blushing red and quivering with desire as he claims her in every way he pleases. Her need for him quickly grows into something much deeper, but even as he protects her from the dangers of a hostile planet she wonders whether she can ever truly heal his wounds and take her rightful place in his heart.

In two long strides he was at her side. He grabbed her by the arm and sank down onto the rim of the stone basin next to her, then dragged her face-down across his lap. Lexi fought hard, kicking and punching, but she was no match for his much greater size and strength.

She cried out as his broad palm connected with her backside. First in shock, then in pain. She struggled even more fiercely. In response, the savage locked her legs tightly between his, shifted her body on his thighs, and whacked her again, spouting off all the while in a harsh tone.

Lexi hardly registered the sound. Her entire being focused on the hand now cracking down over and over on her nearly bare bottom. The cylerian might protect against heat and cold, rain and wind. But it did nothing to stop the overwhelming sensation of burning and stinging he’d ignited on her backside.

She’d heard of spanking. An ancient form of discipline practiced back on Earth, used primarily on wayward youth by primitive people who lacked the ability to control their offspring with reason and logic. But she’d never heard of it being practiced in the modern world. You’re not in the modern world, she reminded herself. You’ve been thrown into an uncivilized land filled with crude beings. And right now one of them is treating you like a naughty child.

She tried to control her thoughts, send her mind far away from the sensory overload her body was experiencing. It was no use. Nothing in her training had prepared her for this. The sound of his sharp, rhythmic swats. The warm bare hand sending licks of fire up and down her backside. The hard masculine thighs crushing her nearly naked stomach and breasts. The tension she could feel radiating from him, tightly controlled power pouring through his body, ready to explode in an instant.

She’d never felt so helpless in all her life. He whacked her again and she squirmed wildly, trying to evade his hard palm.

He stopped for a moment and shifted her again on his lap. In her heightened state of awareness, she caught a strangely compelling scent emanating from him; at the same time she became aware of a growing bulge in his crotch pressing up against her.

Lexi froze, remembering the swollen penis she’d seen on the other man, the way he stroked it and leered at her. This time the man who’d protected her was the one in an obscene state of arousal. Would this crude savage try to engage with her in some bizarre sexual act after his display of mastery?

2015-08-09
+admin
Previous: Taming His Mate by Vonna Harper
Next: A Scandalous Arrangement by Ashe Barker