Don't Miss
Home / Blog / His to Command by Kallista Dane

His to Command by Kallista Dane 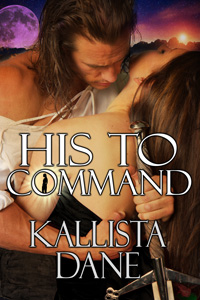 When Amanda Jane Norris sets out on an undercover mission to infiltrate the ranks of a rogue general on the planet of Neodyma, a world which has turned its back on modern technology, she has complete confidence in her ability to complete her task. But then things go terribly wrong…

Captured by the power-mad general, Amanda’s ordeal begins with a thorough, intimate physical examination which leaves her both utterly humiliated and helplessly aroused. Her body’s intense response to the embarrassing procedure ensures that she will be sent to join the harem the general provides for his men, but only after she is punished for her failed attempt at espionage. After a long, hard spanking in the public square, Amanda is fitted with the red tail of a harlot and prepared for her training.

She is given first to Kaden, a warrior on a secret errand of his own. He quickly proves more than willing to compel her submission with a firm hand applied to her bare bottom, but his plans for her are very different from the general’s. When Amanda first experiences the intense pleasure that a man’s mastery of her body can bring, it is unlike anything she has felt before, and though it fills her with shame she is left begging for more. But can she afford to risk asking for Kaden’s help bringing down the general?

Publisher’s Note: His to Command is the first book of the Alien Masters series. It includes spankings and sexual scenes. If such material offends you, please don’t buy this book.

Her eyes never left his as she moved her hand down and touched herself. She’d never done that in front of him. He let out a groan, sliding a hand up and down the stiff cock protruding from between the folds of his tunic. “Do it again. More.”

As though realizing how shameless her behavior had been, AJ put her hands behind her back and shook her head, blushing furiously.

“Are you refusing to do as you’re told?” His voice took on a rough edge.

“Perhaps I’ve been too lenient with you, Tajina. I am the Master here, am I not?”

“And it is your duty to please me in every way I require, is it not?”

Her voice was barely a whisper. “Yes, my Lord.”

“What did I tell you I would do if you did not obey me?”

“You… you said you would spank me.”

“Do you remember what else I said?”

“You said that when you spanked me, we’d both be naked.”

“I did. And then I promised you that by the time I was through you’d be eager to do whatever you were told to do. Right?”

“Stand up and take off your clothes.”

AJ stood, pulling off the gown that had bunched up around her hips. Underneath she still wore the Device with its leather straps and tail, as she was required to do every night in the Lyceum. Kaden sat down on the edge of the bed.

She took a hesitant step. His fingers closed around the leather straps circling her waist. With one powerful yank, he tore it off. The tail dropped to the ground with it, leaving the device lodged firmly in her backside. He stripped off his tunic. Underneath, he was naked as well, his hard cock jutting up between his legs.

“Come here and bend over.”