Don't Miss
Home / Blog / His to Conquer by Kallista Dane

His to Conquer by Kallista Dane 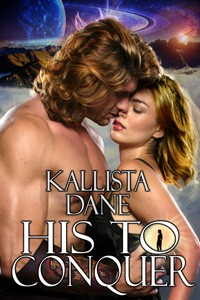 When diplomat Talia Anderson travels through a star portal to Gadolinium, an ice-cold planet settled thousands of years ago by Viking explorers, she expects to find a peaceful society waiting for her arrival. To her shock, she instead emerges from the portal into a city in the midst of an invasion by a band of ruthless, warlike creatures set on conquest of the planet.

After she is waylaid by the invaders, Talia is saved by a tall, handsome stranger, but later that night she ends up as a captive of the barbaric creatures nonetheless. Upon arriving at their stronghold, she is informed that she will soon be auctioned as a slave. To ensure her ability to please her future master, she is subjected to a thorough, intimate physical examination, and her efforts to resist merely result in painful, humiliating punishments which leave her bottom sore both inside and out.

Since he first came to her aid in the street, Prince Kylar has been unable to get Talia off his mind. After learning of her capture, he sets out to free the feisty, beautiful Earth-woman. His rescue attempt proves successful, but Kylar quickly discovers that Talia will require a firm hand to keep her defiance in check, and when she disobeys a simple order he takes her over his knee for a long, hard, bare-bottom spanking.

Back amongst his people at last, Kyler takes it upon himself to introduce Talia to all the pleasures a man’s dominance can bring. His masterful lovemaking leaves her both blushing with shame and quivering with desire, but is she truly prepared to submit fully to his conquest of not only her body but her heart as well?

“That’s it!” He grabbed her around the middle and sank down on a waist-high boulder, pulling her over his lap. “I’ve had enough of your stubborn, willful ways.”

He slid his hand up her thigh, pulling the tail of his shirt up and baring her to the waist. “You may choose to starve,” he declared, “but I’ll be damned if I’m going to go hungry because you’re too proud to do your fair share of what needs to be done to keep us alive.”

The sharp smack of his broad palm connecting with her bare bottom echoed off the rocky chamber.

“You’ve been nothing but trouble since the moment I laid eyes on you,” he growled, spanking her first on one cheek, then the other.

Shocked, she laid there for a moment, then began kicking and bucking. He responded by shifting her body to trap her legs between his, and gave her two more firm whacks.

“I’ve been aching to spank this naughty ass since I caught you disobeying orders, wandering around alone in the city like some poor addled creature without a brain in your head.” His voice rose and he punctuated his words with more smacks. “You put both of us in danger that night. I had to give up my scouting to rescue you. I’ll wager the only thing that kept Balam from killing you outright was the sight of this saucy backside.”

She squealed as his hand came down harder. “Then you ruined our mission to free the king with your rebellion on the auction platform. In order to save this obstinate ass of yours, I had to abandon my own father, leave him there, locked away in a dank cell.”

His voice broke at that and he spanked her even harder, as if to punish her for causing him to give way to emotion.

Talia barely heard his rant through the riot of feelings going on inside her. The spanking hurt, yet it was so different from the punishments she’d endured back in the palace. She’d been paddled with a wooden board by Balam, forced to kneel at Sori’s feet for whippings from a mastodon penis as thick and hard as an alligator hide. But she’d never been draped over a man’s lap before, with the heat of his body warming her in front while his bare hand lit a fire on her bare bottom. This punishment was so intimate.

Unable to get away, she wiggled around on his lap as he spanked her steadily, reciting a list of her misdeeds all the while. Suddenly she became aware of a growing bulge beneath her. He was becoming aroused. It seemed that every time his body came in contact with hers, his base animalistic urges awakened. Would he now subject her to more of the humiliating acts she’d been enduring ever since she arrived on this cursed planet?

2015-10-10
+admin
Previous: The Alpha’s Reluctant Mate by Morganna Williams
Next: The Demon’s Woman by Melody Parks