Don't Miss
Home / Blog / His to Protect by Shelly Douglas

His to Protect by Shelly Douglas 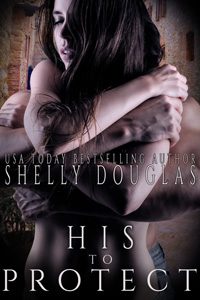 She was supposed to be off-limits. He took her anyway.

Most men wouldn’t even dare to look at the stepdaughter of a powerful mob boss, but if Anthony DiPasquale followed the rules he wouldn’t be in Italy on the run from the feds in the first place. When his interest in Jennie Salerno puts the beautiful nineteen-year-old in danger, however, he quickly decides she will be coming with him for her own protection, whether she likes it or not.

Jennie soon learns the hard way that Anthony will not hesitate to carry out his threat to spank her if she disobeys, but when he claims her virgin body roughly while her backside is still sore the pleasure is more intense than she would have thought possible. Even after she puts herself at risk again and her bottom is punished inside and out, her arousal is as intense as it is undeniable.

Over the coming days Jennie discovers what it means to be thoroughly mastered by a man who never tires of making her blush crimson and beg shamefully for each quivering climax, but when the heat on Anthony dies down and he returns to America, will he bring her home with him?

Publisher’s Note: His to Protect includes spankings and sexual scenes. If such material offends you, please don’t buy this book.

“What did I say would happen if you left the property without my permission?”

She lowered her flushed face to the mattress, hoping his question was rhetorical.

“I’m listening, Jennie. What did I say?” His tone was deep and eerily calm as he squeezed the flesh on her firm bottom.

“Please,” she begged, turning her head. “Please don’t make me say it…”

His lips were stretched in a grim line as he landed a slap to each cheek. “Answer me. Now.”

He peppered her ass with quick smacks before clearing his throat. “I want to hear you speak in a full sentence, young lady.”

“You said you’d do more than spank me,” she uttered in a cracked voice, her eyes filling with tears. “Please. I just needed to get out for a while.”

“You know the rules. Not only did you risk your safety, but you talked Domenic into driving you to Orvieto—which put him in danger as well. Now, then… what is it that I’m going to punish?”

Though Anthony was always true to his word, it was still difficult to believe that he’d carry out such a threat. “You said you’d…” But as she squeezed her eyes shut to release one lone tear, a chill ran through her at the sound of a container clicking open.

And then her puckered hole pulsed at the memory of his warning.

“Say it,” he demanded as his wet finger rubbed the tender rim of her anus.

She swung her flaming face to meet his dark expression. “Please! I promise not to…”

“Answer my question, young lady,” he snapped, removing his finger to slap the inside of her thigh.

Her back arched as she jumped from the impact. “Ow! That burns!”

“Where? Where will I discipline you for disobeying me?” he demanded, tapping his thumb over her tight rosebud.

Though she could feel her face flaming with humiliation, there was an odd thrill that ran through her as he spread her legs further apart, boosting her hips upward. Tilting her head to glance at him again, his countenance seemed different than it had before. Although his jaw was set in a disapproving manner, his eyes were filled with a burning desire as he gazed in between her legs.

He was enjoying this.

As his thick finger slid into her crimped opening, her pussy clenched and her clit fluttered as she groaned. “You said you’d punish me… there.”

“Nope. Not what I’m looking for,” he stated nonchalantly, removing his lubricated finger only to drive it deeper into her fluttering pucker. “Hmm. Maybe if I finger fuck this snug hole, it’ll jog your memory.”

A large tear dripped down her nose as she choked out the embarrassing words. “My ass. You said you’d punish the inside of my ass.”

“Good girl.” His whisper was husky as he added a second finger to stretch her anus wider. “First, I’m going to slide a steel plug deep inside your delicate little ass, and then you’re going to ask me to give you a hard strapping with my belt.”

Her lower lip trembled as she considered his order. “Y-you want me to ask for a spanking?”

“Yes, I do, bad girl,” he growled, taking a fistful of her ponytail, yanking her head backward to meet his gaze. “Now open those pretty legs nice and wide, before I decide to punish this sweet ass with my stiff cock instead of a shiny implement.”

2019-03-09
Chris
Previous: Trained by the Alien by Maggie Carpenter
Next: His Caged Princess: A Dark Sci-Fi Romance by Marlee Wray