Don't Miss
Home / Blog / His to Tame by Kallista Dane

His to Tame by Kallista Dane 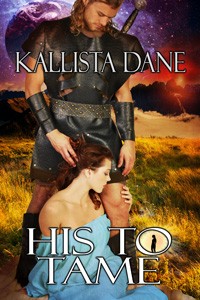 After medical worker Selena Reston saves the life of a badly injured warrior from a far-off world, she quickly discovers that the huge, handsome barbarian who goes by the name of Haldor is unlike any man she has ever met. When her behavior displeases him, she is shocked to find herself pulled over his strong thighs and held there as her bare bottom is soundly spanked. Stranger still, his bold dominance awakens desires in her that she cannot explain.

Though such things have been forbidden for many years on Earth, she cannot help longing for the feel of his masterful touch on her naked body, and when he claims her hard and thoroughly she is left begging for more. Haldor is a not a man to be trifled with, however. Now that she is his, he will demand her obedience, and he is more than ready to teach her a stern lesson when she needs to be reminded who is in charge.

As much as it shames her to admit it, his firm discipline only makes Selena’s passion for Haldor burn hotter, but her life and her newfound romance are put in jeopardy when she is captured by one of his enemies who seeks to use her for his own evil purposes. Can the warrior who tamed her body and her heart find a way to bring her home safe?

She looked up at him then, her eyes wide with horror.

He sat up straighter in bed, tossed the sheet aside, then patted his naked thighs. “Present yourself as required, and we will begin.”

Selena opened her mouth to protest, then shut it again. No matter how humiliating and painful it might be to remove her clothing in front of this stranger and then allow him to strike her naked bottom with his bare hand, it was infinitely preferable to the idea of being exiled to a penal colony.

She respected the logic of his decision. If she was to suffer punishment for what she had done, it should be in a way that held significance for him, since he was the wronged party. Being banished was Earth’s civilized way of dealing with criminals. His society was more primitive. It made sense that he would only be satisfied by meting out a physical punishment.

He was waiting. She had to go through with this. He’d made it a matter of honor for both of them. Selena swallowed nervously and began unfastening the front of her uniform. One solid piece of fabric, she had to take it off from the top to bare her bottom for him.

She kept her eyes downcast as she stripped it off her shoulders. The uniforms were designed to hang shapelessly, so as not to draw undue attention to one’s physical attributes. But underneath it was molded to fit her body, so she wore nothing else except her shoes.

Selena heard him take in a sharp breath as she drew it down to her waist, baring her full breasts to his view. She could feel his eyes on her. She shivered involuntarily and her nipples hardened. No one had ever seen her naked breasts before. She wondered how they compared to the breasts of the women on Gadolinium. Did he find them… pleasing? Resisting the urge to cross her arms over them, she kept on going.

Hands shaking, she pulled her uniform down to her thighs with one quick yank. Then she climbed awkwardly onto the bed. Supporting most of her weight on her elbows and knees, she hovered over his lap, trying not to let her pubic area come in contact with his naked penis.

For a moment, neither of them moved a muscle. Selena’s stomach was in knots. Her heart raced so hard she was afraid she’d faint. When his hand touched her back, she flinched as though he’d struck her violently.

“I know you’re frightened. As well you should be. A woman’s first punishment session is a serious matter. It is customary to begin slowly, pausing between strokes to allow the one administering discipline to deliver a stern speech reminding her of why she is being spanked and give her time to adjust to her submissive state.”

2016-03-20
+admin
Previous: Begging to Be Owned by Emily Tilton
Next: Scarlet’s Scandalous Secret by Maggie Carpenter