Don't Miss
Home / Blog / His to Train by Maria Monroe

His to Train by Maria Monroe 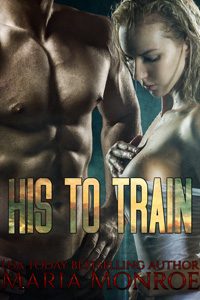 Ensuring the continued survival of a village full of people in a harsh, war-shattered world is no easy task, and Luca Price is not a man to be trifled with. When he offers beautiful newcomer Victoria Davis the chance to earn a living competing against other women in extravagantly staged matches for the entertainment of the local population, he makes it clear that he will be taking charge of her training personally and he will expect nothing less than complete obedience.

When Victoria puts Luca to the test, the roughly handsome former professional fighter proves more than ready to spank her until she is sore and sobbing, and she soon learns the hard way that repeated defiance will result in even more shameful chastisements. But even with her well-punished bare bottom sore both inside and out, Victoria cannot hide her intense, helpless arousal, and when Luca takes her in his arms and claims her thoroughly she is left deeply satisfied.

Amusing the masses in this savage world is a dangerous game, however, and injuring a rival in an act of self-defense makes Victoria question her part in the decadent pageantry. But when it becomes apparent that something much more sinister than anyone realized is going on and Victoria is being targeted by a man Luca once called his friend, will he be able to keep her safe?

Publisher’s Note: His to Train includes spankings and sexual scenes. If such material offends you, please don’t buy this book.

She stood, her ass burning from the spanking, and her asshole tingling from the invasion of his finger only moments earlier.

“Kneel on the couch, facing the back. Then bend over.”

As soon as she kneeled on the couch, he placed his hand on her back and gently pushed her so she was leaning forward.

She was opened and exposed, bent over and on display. What was he going to do? Put his finger in her ass again? She’d felt so violated. So embarrassed. But, if she were being honest, also so turned on.

“Sometimes,” began Luca, “a naughty girls needs a spanking right here on her tight hole.” He pulled her cheeks apart again and, with a few fingers on his other hand, tapped her lightly between her cheeks.

Victoria moaned in humiliation. Here she was, with Luca holding her wide open to spank her asshole. But she did more than moan when he spanked her seriously, his fingers landing quickly and firmly right there… To have someone not only touching her there but striking her there was beyond embarrassing, and the humiliation was far worse than the pain, though it did hurt a lot.

“Oh! No!” Victoria couldn’t help getting out of position. She flew upward, her hand covering her bottom. “I can’t! Please!”

“You can. And I will. Bend back over, Victoria, or this is going to be much worse for you.”

“And you’re not supposed to. Remember?” He chuckled, and the fact that he was laughing at her expense, when she was being forced to take a long and hard punishment, made her even more embarrassed.

“I remember, Sir.” She bent over once more, then spread her legs wide.

She heard him walk away, then return, and when she glanced up she saw that he was holding a thin wooden rod in his hand. It was about the length of a ruler and the width of her pinky finger. She didn’t like the looks of it one bit, but she knew better than to ask him about it. Not to mention the fact that she had a feeling she’d discover what it was for very, very soon.

“This time I want you to reach behind you and spread those cheeks as far as you can so I can spank you right in there.”

“Oh, god,” she moaned, humiliation filling her stomach. But she did as he said, reaching back and grabbing her cheeks, pulling them apart as far as she could.

“Beautiful.” Luca ran a finger over her hole before stepping back. “I’m going to use this very thin wooden rod to spank you right there.” He tapped her anus twice with the tip of his index finger.

Victoria’s cheeks burned as she imagined how terribly this was going to hurt.

“I’m only going to do ten, since this is your first offense. I think this will teach you that it’s better to just take the original spanking with dignity than try to stop it and get these extra punishment spanks instead. Now. Don’t move out of position this time. I know it’s going to be difficult to keep holding your bottom open, especially since you’re the one making it so easy for me to spank you there. But it’s important that you participate in your punishment like this. Do you understand?”

“Yes, Sir.” She forced the words out and steadied herself. “Please, Sir, spank me between my cheeks with the wooden rod.”

2019-01-12
Chris
Previous: Tamed on the Ranch by Delta James
Next: Captured and Kept: A Dark Reverse Harem Romance by Piper Stone