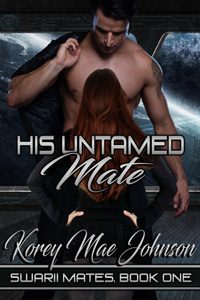 After her abduction from Earth, nineteen-year-old Ellie Jonas quickly became the favorite pet of an alien warlord, and while she still blushes crimson each time she is stripped, spanked, and put on display for him, as the months have passed she has begun to adapt to her new life. But everything changes the day she meets Commander Graham Masterson of the Swarii.

Ellie knows instantly that there is something special about Graham, and after she risks her master’s wrath by visiting the handsome alien warrior in the dungeons it soon becomes apparent that there is much more than just physical attraction between them. From the moment Graham first lays a hand on her, Ellie’s body leaves her in no doubt that she is bound to him for life, and with every passing second her need for him grows more intense.

Yet even after Graham and his men make their escape and take her along, Ellie cannot help wondering if she has merely traded one form of captivity for another. She aches for Graham to rip her clothes off and claim her hard and thoroughly, and he promises to be a devoted mate, but he also makes it clear to Ellie that he will not hesitate to bare her bottom for a painful, humiliating spanking if she fails to do as she is told.

Despite Ellie’s efforts to resist her body’s demands, Graham’s dominant lovemaking proves more pleasurable than she would have ever dreamed and she is left yearning for him to take her as hard and often as he pleases. But when Ellie’s repeated refusal to follow his orders puts her life at great risk, will Graham be prepared to punish his untamed mate as sternly and shamefully as necessary to teach her to obey?

Publisher’s Note: His Untamed Mate includes spankings and sexual scenes. If such material offends you, please don’t buy this book. Also note that an earlier version of this book was previously published by another publisher under the title Never Submit. This updated version is more than twice as long as the original and includes over 50,000 words of brand new material.

“You’re my mate, and if you don’t choose to be an obedient one, then you’ll find yourself in this position very often, I guarantee you. There is one leader in this relationship, and that is me. Get that clear.”

“I hate you!” she shouted, feeling helpless and defeated.

“Fine, hate me if you choose. But you will obey me,” he snapped. Unless she was mistaken, she was almost certain that she could hear pain and frustration in his tone.

Just as she was beginning to wonder if he was feeling just as helpless as she was, the spanking commenced.

It was hard to say how long the spanking lasted. Probably not for more than five minutes, but for her it felt like she was kicking powerlessly over his lap for days. During these long minutes, she went through a range of emotions: anger was the first. She clenched her teeth shut, hoping to play the bad ‘whipping boy’ who suffered in silence.

The idea of silence quickly melted down until she was kicking, crying, and wailing.

Then suddenly, out of nowhere, remorse hit her.

She had felt remorse slightly after Peyton had switched her. She’d had a brief moment where she could see things from his point of view and felt like she did, in a way, deserve a punishment for putting them both in danger.

But she hadn’t expected to ever feel remorseful about disobeying Graham. The emotion, and the clarity of it, hit her like a truck. Graham’s point of view must be that this alien girl that he wouldn’t have ever chosen to marry couldn’t follow the simplest instructions. He was the ship’s captain and his new mate was constantly undermining him and making him appear weak and unfit to command. What had Graham done to deserve a mate who was so completely wrong for him?

Whether or not that was actually Graham’s perspective, or if she was reading too much into it, was irrelevant. She was suddenly thinking, Why can’t I just be a good mate and obey him? It wouldn’t hurt me. He didn’t ask for much. Maybe I do deserve this. Maybe I wanted this reaction on some level…

This thought passing through her mind made her realize that maybe she wasn’t in her right mind. There was no way in hell that she’d ever wanted a childlike chastisement that would reduce her to tears. No, no. This was just another case where she didn’t think things through and she was sloppy enough to get caught.

Still, she was reacting to the spanking differently now. She was crying, but now she was crying softer. Her throat was sore and dry from shouting and screaming in protest, and although his spanks felt more and more painful against a bottom that was getting persistently more and more tender, she was too tired to fight against him.

“Are you going to be a good girl?” she heard him ask.

“Y-y-yes!” she sobbed, pressing her face against the blankets under her chin.

Finally, the spanks stopped and the room silenced. She could feel her bottom actually throb, and it felt like it had been tenderized. She could leave his lap now, she knew, but she made no move to do so. She found that she didn’t want to move. She just wanted to sob there, realizing that this relationship might doom her more than her relationship with Jazeel. While Jazeel didn’t control any part of her mind or soul, Graham apparently did.

How could she be free, she wondered, if he already had such tight webs woven around her? How could she escape the part of herself that had apparently decided that she was his?

2017-08-21
Chris
Previous: The Billionaire and the Wedding Planner by Emily Tilton
Next: Corrected by the Doctor by Samantha Madisen