His Wayward Woman by Ava Sinclair 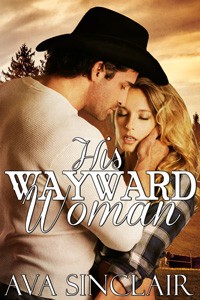 Jace Whitaker has always had a special place in his heart for Lily Mae Slater, and when he left for college it pained him to hear about her running wild in his absence. Upon returning to their small Texas town for Lily’s high school graduation only to have her show up at his door drunk, angry, and looking for a fight, Jace’s patience ran out, and before either of them knew it she was over his knee with her bottom bared for the good, hard spanking she so desperately needed.

Seeing the embarrassing chastisement as proof that she could never be anything more than just a silly little girl to Jace, eighteen-year-old Lily bought a bus ticket for California the next morning. She did her best to forget the only man who ever cared enough to take her in hand, but seven years later the fact that Jace never came looking for her still hurts.

After the passing of her mother brings her back home for the first time since the day she boarded that bus and tried to leave Jace in her past, Lily’s pain and anger boil over at last. When she arrives at the ranch Jace now owns and operates, planning to tell him exactly what she thinks of him, history repeats itself and she quickly finds herself with a bright red, well-spanked bottom.

Now that Lily is back in his life after all these years, Jace isn’t going to let her run off again. This time he is going to show her exactly how he feels about her, and she is going to learn what it means to be taken long, hard, and thoroughly by a dominant man. But living on her own in the city for so many years has left Lily with more sass than sense. Can the firm-handed rancher keep her both in line and in his life, or will he blow this second chance to tame his wayward woman?

Her hands flew back in an attempt to stop the spanking, but he merely caught and restrained them without faltering in his punishment of her bottom. The blows were unrelenting—heat building on heat, sting on sting. He was thorough, almost measured in his intent, striking one cheek multiple times until she was screaming before repeating the action on its twin before peppering her bottom with random slaps that had her bucking on his lap like a wild pony.

And this was before he started on her lower buttocks and thighs, driving Lily Mae beyond tears into a protracted, infantile bawl interrupted by unintelligible pleas and apologies.

Then suddenly and abruptly, it was over, and Lily Mae found herself on her feet, dancing the ridiculous dance of a soundly spanked woman, her hands cupping her injured bottom as she gyrated.

“Lily Mae Slater, have you learned your lesson?” His stern voice cut through her cries, and she tried to answer, tried to focus on his handsome face. But when she did, she realized he wasn’t looking at her, but at her inner thighs, and she moaned in shame as he ran a finger up through the trail of arousal evident there and answered his own question. “You know what? I don’t think you have.”

He stood and picked her up then, cradling her like a child in his arms.

“What are you doing?” she asked.

“Giving you the second part of your lesson, Lily Mae. I was a damn fool for not seeing what you needed years ago. And you were a damn fool for running away once you got it.”

He kicked open the door to his bedroom and laid her on the bed, his body covering hers. She could feel his cock hard against her thigh, pushing against the denim of his pants. Lily Mae groaned in spite of herself. His eyes were on hers now, and she realized he knew her secret.

He was giving her what she came for, what she’d craved since she’d walked out of his life seven years earlier, that nameless thing she needed, the absolute physical and sexual domination by a man who loved her.

Jace caught her face in his hands and stared down at her.

“Lily Mae Slater,” he said. “You’re a walking disaster. And I’m going to fix you. I’ve already spanked you, but that was just part one. Now I’m going to fuck you until you can’t stand up. And you’re going to love every minute of it. Understand?”

2016-04-01
+admin
Previous: Mated to the Warriors by Grace Goodwin
Next: Her Millionaire Master by Maria Monroe