His World, His Rules by Jasmine Haley Adams 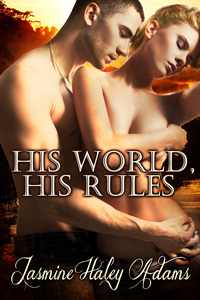 Twenty-one-year-old Mindy Parker has led a pampered life, blissfully ignorant of her father’s involvement with organized crime, but then one day everything changes. After the mafia makes a threat against her, Mindy suddenly finds herself on her way to South America to start over, and things quickly go from bad to worse when her plane crash lands in the rainforest.

Stranded hundreds of miles from civilization, her fate rests in the hands of the only other survivor of the crash, a former major in the Bolivian army named Jorge Perez. Though Jorge takes it upon himself to ensure Mindy’s safety, he has no intention of putting up with her sharp tongue or defiant attitude. He is not a man who makes idle threats, and when Mindy fails to follow his orders her disobedience soon earns her a long, hard spanking, the first of her life.

Jorge’s skill proves sufficient to guide them both to safety in a small village, but once there Mindy finds that her new life will be far different from the one she left back home. She will be expected to work hard and pull her own weight, and Jorge remains more than willing to spank her as often as he feels it necessary to deal with any laziness or misbehavior.

Despite his harsh punishments, Mindy cannot help surrendering herself utterly to her firm-handed protector, and when Jorge takes her into his strong, loving arms, she feels more complete than she ever has before. But is there truly a place for a girl like her in his world?

“Do I need to teach you another lesson?” Jorge asked. “Did you forget what you learned yesterday?”

Mindy stopped in her tracks.

“If status is so important to you, I should tell you that before I was a gardener, I was a major in the Bolivian army,” Jorge said darkly.

Mindy got a feeling of butterflies in her stomach. Her face colored beet red and she looked at her feet.

“So I know a thing or two about survival in the rainforest, how to evade an enemy, and how to navigate in this kind of environment,” Jorge said. “Come here, please.”

Mindy’s feet obeyed, even though she wished they wouldn’t.

Jorge sat down on a fallen tree.

“Give me your hand,” he said. Resigned, Mindy did so.

“Like, I’m really sorry about, like, harshing on you,” Mindy babbled, as Jorge pulled her over his knee.

“You need to learn to respect other people,” he said. Mindy knew he was right.

He rubbed his palm over her cheeks. She sighed. He paused.

Mindy didn’t know what to say.

He brought his hand down in a hard spank. Her cheek contracted and her leg kicked up as she felt the sting of his hand.

“No!” she said, too quickly. She felt a warmth spreading between her legs, and furiously wished she could suppress it.

He brought his hand down in a flurry of blows, spanking her mercilessly until both her legs were kicking. On top of the previous night’s spanking, Mindy felt like her behind was on fire, as each new spank made her squirm.

“Yes,” she replied in a quiet voice.

“I think it will be ‘yes, sir’ from now on. Don’t you agree?” He underscored his point with more very hard spanks.

“Yes, sir,” she replied in an even smaller voice.

“Now we can begin,” he said. She groaned.

2015-09-27
+admin
Previous: Staking Their Claim by Ava Sinclair
Next: Owned and Mastered by Rose St. Andrews