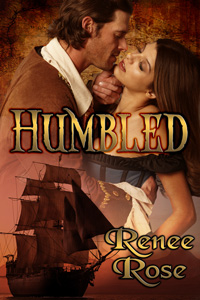 Sentenced to die at age eleven for stealing a pig, Jean-Claude receives an unexpected reprieve when a young aristocrat girl takes the blame instead. When the mobs of the French Revolution fall upon her château years later, Jean-Claude knows he must save her and repay his debt, but as they begin their long flight to safety he makes it clear he is not her servant and he will deal firmly with any disobedience. Though he initially intends to send her off by ship, the beautiful, feisty Corinne inspires a fierce protectiveness in Jean-Claude that makes it hard to say goodbye.

Corinne is alternately infuriated and attracted to the handsome peasant who has no qualms about turning her over his knee and spanking her bare bottom when she steps out of line. When he ends up joining her on a ship to New Orleans, their futures become inextricably intertwined, but can a common-born blacksmith and the daughter of a lord find enough common ground to make a permanent match?

The idea that he had never handled such a fine article of clothing somehow added to her humiliation—in the course of less than twenty-four hours, she had been so lowered that a common peasant now claimed to be her master, and even worse—she allowed it. Was she truly bending over a log and offering her backside for his punishment?

She gasped as he dragged her chemise up, exposing her bottom to the fresh air. Gooseflesh lifted across her cheeks in anticipation of her chastisement, and she shivered at the chill of the breeze on her sex. The first lick of the switch struck like a line of fire, scorching her flesh, stinging the surface with the pain of a thousand ant bites.

She bit down hard on the cloth filling her mouth, the dry muslin rough against her tongue. The second stroke was just as horrid, and the third came too soon, before she had even caught her breath. She started to moan but sucked it back, making a strange gurgling sound instead. Four, then five strokes whipped across both cheeks, and her legs began to tremble as if they might not hold her. She clung to the bark of the tree, leaning into her chest, ducking her head. She did not want him to have the satisfaction of seeing her cringing face. On the sixth stroke, the switch broke, yet he did not even pause, simply changing it for a fresh one and beginning anew.

She wanted it to stop. After each stroke she was certain she could not take another, and yet they continued to rain down on her quivering buttocks, leaving what she imagined were dreadful welts. She loosed an arm from where it was tucked beneath her chest and reached her fingers back to cover her poor, raw flesh, but he caught her wrist before it even arrived, twisting her arm behind her back with an ease that troubled her. Who else had he thrashed? Why did he seem so comfortable tormenting her this way?

She pressed her cheek into the bark, the bite of the wood providing a welcome distraction against the insistent fire on her backside. She lost count after twelve and surrendered to the pain, all resistance leaving her body so it hung heavily over the log, her feet dangling uselessly. The second switch broke, and he used the third, breaking it after three cruel stripes. She prayed he would not cut another.

The fabric of her chemise slid down her thoroughly chastised bottom, even its silk an unwelcome touch on her swollen orbs. The skirts of the dress followed and a large, warm hand arrived in the middle of her upper back.

“It is over, Corinne,” he murmured.