Hunted and Claimed: An Alpha Shifter Romance by Delta James 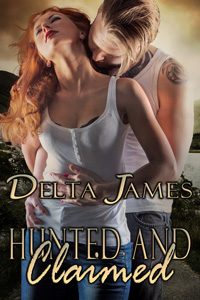 She thought she could run from her mate. Then he lassoed her.

Riley decided years ago that she would be better off on her own, but when the alpha of the local pack finds out there’s a lone wolf causing trouble on his turf he takes matters into his own hands.

As far as Cameron Nichols is concerned, Riley will be joining his pack whether she likes it or not. Her only choice will be whether to submit to his authority with or without needing to be stripped bare and spanked over his knee until she is kicking and crying and promising obedience. When she chooses the latter, the Navy SEAL turned cowboy is more than happy to oblige.

But Cameron knows instantly that Riley isn’t just a feisty female in need of an alpha’s firm hand. She is his mate, and she knows it too, despite her best efforts to deny it. No matter how many times she tries to run, he will always chase her down, punish her thoroughly, and then mount and claim her so roughly that all she can do is scream her helpless, shamefully intense pleasure into the pillow as her body betrays her and surrenders ever more completely to his demands.

Publisher’s Note: Hunted and Claimed is a stand-alone novel which is the seventh entry in the Wayward Mates series. It includes spankings and sexual scenes. If such material offends you, please don’t buy this book. Also note that Hunted and Claimed shares its setting with Adaline Raine’s previously published books Marked by the Alpha and Rules of the Pack, and it was written only after receiving Adaline’s permission and support.

“You, my mate, are going to get your first taste of a different kind of punishment.”

Riley was a chef and knew full well what happened if you got fresh ginger juice in a cut.

Cameron reached between her legs and scooped out some of her pussy’s liquid essence. He pumped his fingers in and out of her, making her moan as he withdrew. She inhaled her breath sharply as he took his now well-lubricated index finger and probed her puckered rosebud.

“Yes, Riley. Naughty little she-wolves learn that their mates are creative in the ways that they discipline them. It’s been said that even the haughtiest of alpha females quickly acquiesce to their mate’s authority with a bit of scored ginger up their bottom hole. My guess is you’ll be no different.”

Riley began to struggle in earnest and Cameron held her legs apart and alternated swatting her deep red backside and her very wet pussy.

She howled in outrage, shame, and pain.

He stopped swatting and began to pump his fingers in and out of her pussy, making her give over to her aroused state. As she began to climax from his attentions with her mind focused on what he was doing to her pussy, Cameron deftly pushed the fresh ginger in her dark entrance.

“Yes, Riley. Once I think it’s served its purpose, and you’re feeling the sting as well as the discomfort of having your ass plugged for the first time, I’ll finger you until you come and then I’ll remove the ginger. If I get no more resistance from you, I’ll let you get dressed. Keep up this caterwauling and struggle of yours, and you can keep the ginger in your ass until we get to Marco’s. I have to tell you, little wolf, that’s a long time to be letting that ginger work on your attitude.”

“Please, Cameron, take it out.”

“You want to show me you can behave and take your punishment?”

Cameron watched as the ginger did its work. Riley’s butt cheeks clinched and she writhed over his lap seeking some kind of relief from the ever-increasing burn. He didn’t fuss at her as he could tell she was only trying to soothe her own discomfort and not get away from the punishment itself.

“Good girl,” he crooned as once again his hands stole between her legs.

He began to gently stroke her well lubricated pussy, and then stroke with more vigor. Riley’s whole body was now pulsing with need for him. He increased the speed of his fingers as he growled lowly at her, watching her body shudder with need. Her voice caught and the sounds that she was making now made him smile as they indicated she had given up the fight.