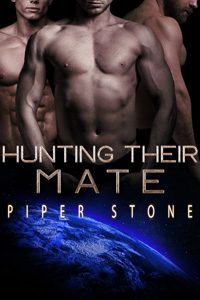 They hunted me. They caught me. Now they’re going to breed me.

As far as I’m concerned, the Cenzans will always be the enemy, and there can be no peace while they remain on our planet. I planned to make them pay for invading our world, but I was hunted down and captured by two of their warriors with the help of a battle-hardened former Marine. Now I’m the one who is going to pay, as the three of them punish me, shame me, and share me.

Though the thought of a fellow human taking the side of these alien brutes enrages me, that is far from the worst of it. With every searing stroke of the strap that lands across my bare bottom, with every savage thrust as I am claimed over and over, and with every screaming climax, it is made more clear that it is my own quivering, thoroughly used body which has truly betrayed me.

Publisher’s Note: Hunting Their Mate is a stand-alone novel set in the same world as Conquering Their Mate and Capturing Their Mate. It includes spankings and sexual scenes. If such material offends you, please don’t buy this book.

Killer slowed his actions as Zacon took his position, lifting my hips. “Hold on, sweet girl, because you’re in for the ride of your life.”

I heard Killer’s words, but I still tensed as wet fingers were slipped into my ass. Preparing me.

I held my breath, trying not to whimper. The pain as two fingers became three was biting, washing through every cell, but within seconds I was able to relax. The anguish shifted, another round of warmth swimming into my muscles.

“That’s it. Just think, I have two cocks,” Zacon chuckled as he pumped in rapid motions.

Killer nuzzled into my neck, biting down then licking up to my ear. “So wet.”

“Yes,” I whispered, closing my eyes as Killer’s cock continued to throb, even growing in size. As Zacon straddled my hips from behind, I stiffened once again.

Breathing out, Killer licked across my jaw to my lips, crushing his over mine as Zacon slipped the tip of his shaft into my asshole. Oh, God. Oh. Fucking. God.

I was stretched, my ass muscles straining to accept the width and I had no way of knowing which cock he’d used. What did it matter? I was filled utterly and completely. Inch by inch, Zacon pushed further inside, all the while issuing words in another language, comforting sounds that continued to surprise me.

The man had another side.

One I could find… tolerable.

As Killer entwined his hands with mine, Zacon slid his hands until he cupped my breasts. The pressure as he squeezed was intense, but I was so alive, every nerve ending seared from the red-hot heat.

Killer finally eased back, taking me with him, planting one of his hands on the bed as the two men began to fuck me in unison, rocking as if they were one.

Bottle rockets were shooting through my brain, stealing every cognizant thought. I was in lust with both of them, the two rugged and sexy men who knew exactly what I needed. I closed my eyes, my head lolling forward as they fucked me long and hard. I was their puppet to do with as they wanted, and in truth, I didn’t mind.

They moved harder and faster, driving in wild yet even strokes. I had no idea how long the amazing session lasted, but I could feel another climax racing to the surface. I clenched my muscles with enough force that both Zacon and Killer roared, the sounds like the sweetest music. Goosebumps popped along my skin and my pants became strangled moans, matching theirs.

Barely seconds later, our combined fire became a sizzling firestorm as both men erupted. I held back, trying to keep this going forever. Then I lost it, the climax jetting into my pussy.