In His Custody by Morganna Williams and Jack Crosby 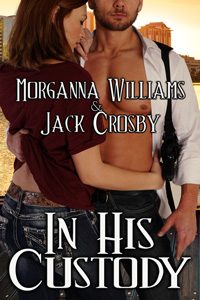 Leo is an experienced FBI special agent, and when he uncovers evidence that a serial killer may be stalking Mona he does not hesitate to take the beautiful, feisty young woman into custody for her own protection. After an inspection of her computer reveals both her most intimate desires and the reckless way she has been seeking to fulfill them online, Leo decides that it is time for Mona to experience the hard, thorough bare-bottom spanking she has needed for so long.

Despite her blushing cheeks and burning backside, the punishment arouses Mona deeply, and when Leo brings her to a quivering climax over his lap she cannot help longing for more. Over the coming days he sets about teaching her the pleasure of surrendering her body to his mastery, and his skillful lovemaking leaves her spent and satisfied. But with the killer continuing to elude capture and the danger to Mona’s life growing by the day, will Leo be able to keep her safe?

Publisher’s Note: In His Custody includes spankings and sexual scenes as well as some potentially disturbing depictions of the crimes of a fictional serial killer. If such material would be likely to offend or upset you, please don’t buy this book.

“My, my, my… someone has been a very naughty girl indeed,” a dark voice spoke from almost immediately behind me.

I jumped; I hadn’t heard him approach. I felt a flush filling my face at his words.

Then he moved in closer and I felt his breath on the back of my neck as one hand came to rest directly on the spot throbbing from that one swat earlier. I couldn’t suppress my shudder.

“I think you need a good spanking, don’t you, young lady?” he asked against my ear.

I closed my eyes as another gush of wet heat filled my panties, my heart rate increased, and I found myself leaning back on him, relishing the contact of his hard body against my softer one. “Yes, Sir.”

Though I knew this was madness—I barely knew this man—he could give me a real spanking and the man flipped my ‘man switch’ in a big way. No way was I missing this opportunity.

Leo turned me to face him, a firm finger beneath my chin lifting my eyes to his. “Do you understand what is about to happen if you submit to me?”

I felt my face heat even further but I pushed the words out in a rush of air. “You’re going to spank me.”

“How do naughty girls get spanked, Mona?” Leo asked as he pushed the hair out of my face to tuck it gently behind my ear.

I gave a shivery sigh as I answered in a breathless voice I barely recognized as my own, “On their bare bottoms.”

He smiled down at me. “That’s right, they get spanked on their bare bottoms.” Then he led me to the couch and sat down in the middle of it before lifting my skirt and pulling me down over his lap.

I moaned softly as his hands rubbed over the outside of my panties before tugging them down as I lifted my hips obligingly. Then he tsked at me, “You are a naughty one; your panties are soaking wet.”

I buried my face in the couch cushions, mortified by his observation and wondering what he thought about my rather large jiggly butt. Then I jerked with a gasp as the first hard swat fell. Leo wasn’t pulling any punches as he delivered slap after slap to my quivering bottom. “Do you have any idea how dangerous the games you’ve been playing are?”

“I didn’t know! Ouuuch! I’m sorry I didn’t know there was a serial killer stalking Facebook!” I tried to defend myself as the stinging heat in my backside grew more and more uncomfortable. “Oooowww! Owww! I’m sorrreee!”

I wriggled my bottom in a desperate attempt to evade his punishing palm; this was far different from the spankings I’d given myself. I had been totally deluded to think they’d been anything close to the real deal.

“You don’t know who any of these men are, any one of them could be dangerous,” Leo said sternly as he increased the speed and strength in each swat now concentrating on my sit spots as I helplessly tried to rock my hips away from his hard hand.

“I’m sorrreeee! Owwww! Please, not in the same place! Nooo! Not there again, ooooowww! Leo, it hurts!” I cried, somewhat embarrassed to be wimping out but there it was.

“I intended for it to hurt. Didn’t I tell you naughty girls end up with very sore backsides?” he asked.

2017-08-12
Chris
Previous: Reformed by the Scotsman by Katie Douglas
Next: The Daddy She Needed by Shelly Douglas