In Loco Parentis by Emily Tilton 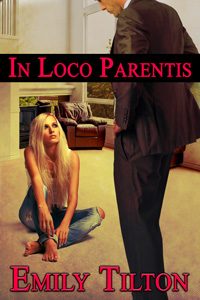 By the time eighteen-year-old Heather Bradshaw returns home for the summer after her first year of college, she feels very grown-up indeed. With her parents away for several months, she has the house to herself, and she isn’t going to let their old-fashioned notions of propriety get in the way of a good time if the opportunity presents itself and the guy is hot. It comes as quite a surprise, though, when the man who sets her heart racing turns out to be her best friend’s father.

Upon realizing that Heather is flirting with him, Tom Malley sets out to play the role of the gentleman. He does his best to ignore her advances rather than take advantage of someone so inexperienced, but it quickly becomes clear that the beautiful, naïve young woman is in desperate need of a man’s firm hand, and if he doesn’t provide the stern dominance that is required she’s going to get herself in over her head while searching for someone who will.

Determined to put a stop to Heather’s out of control behavior and keep her from getting hurt, Tom takes the feisty girl over his knee for a long, hard, bare-bottom spanking that leaves her blushing and promising to behave herself. The humiliating chastisement merely intensifies her desire for him, however, and her response to his discipline deeply arouses Tom as well. Soon enough, he casts aside his hesitation and claims her thoroughly, but will the shame of surrendering her body to her best friend’s father turn out to be more than Heather can bear?

Publisher’s Note: In Loco Parentis includes spankings and sexual scenes. If such material offends you, please don’t buy this book.

“Pull your shorts and panties down, sweetheart,” he said. “Then put your hands forward and take hold of the chair, so you don’t try to get in my way when I’m spanking you.”

Heather blushed and obeyed, pulling the garments down to mid-thigh but keeping her legs tightly closed. To her embarrassment, as soon as she did, and she felt the air moving over her bottom—which shouldn’t have felt shameful, should it, after she had just come out here completely naked—Mr. Malley started to rub her bottom, making circles with his whole hand.

“Good girl,” he said. “This is the way a good girl gets ready for her punishment. If there has to be a next time, I know you won’t make such a fuss.”

“A next time?” Heather squeaked, looking at the red Mexican tile. The way he rubbed her bottom made her brow crease and her breathing get harsh.

“I’m going to be watching you, sweetheart, and checking on you frequently. We need to get you back on track. That starts tonight with this spanking. Tomorrow, you’re going to return the panties to Lisa, and you’re going to apologize. Tonight, your sore bottom is going to remind you that you’ve paid the price of your misbehavior, and that will help you when you make your apology. If you start getting out of control again, with boys or any other way, you’ll end up back over my knee.”

Heather tried to think of something to say—some way to deny his logic—but at the moment, upended with her bare bottom highest, it seemed indisputable.

“Alright, sweetheart. Remember not to try to get in my way, and not to kick. It’s time for your spanking.”

He put his left arm around her waist. The gesture made her gasp not with surprise as much as at the way she felt controlled and held. Then Mr. Malley started to spank her, hard and fast, much harder and much faster than she had expected. The slap of his big hand on her little bottom-cheeks rang out again and again, and very quickly so did Heather’s yelps of pain.

She couldn’t even help pleading with him to stop. “Mr. Malley, please! It hurts so much! I promise I’ll never do it again!”

Heather felt the tears falling, watched them splash on her kitchen floor.

Mr. Malley didn’t answer, but he shifted her so that he could imprison her knees between his thighs, stilling the wayward motion of her squirming bottom. After that he spanked even harder, as if to teach her the consequences of trying to escape his justice.

2016-09-10
+admin
Previous: The Terranovum Brides Trilogy by Sara Fields
Next: Conquering the Queen by Ava Sinclair