In Need of a Master by Emily Tilton 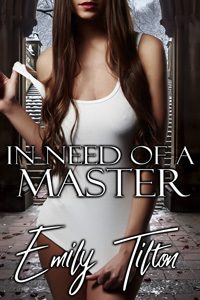 After faerie princess Celestia disobeys the laws of her realm, she is sent to the caverns beneath the earth to be punished by the witchkind who dwell there. She is stripped bare and soundly spanked, but before the worst of her chastisement begins Celestia flees to the world of men with the help of Deirdre Hamilton, a human girl who is equally desperate to escape the witchkind.

When ex-military wilderness guide Jonathan Tucker finds two young women asleep under a tree in the Adirondack Mountains, a strange power compels him to claim them as his and bring them back to his cabin. Over the coming days, he takes the defiant, headstrong Celestia thoroughly in hand, punishing her as frequently and as shamefully as necessary to make her obey.

As Celestia and Deirdre are taught to surrender their innocence to Jonathan completely, they discover how pleasurable a dominant man’s mastery of their bodies can be. But their passion has awakened an ancient magic, and with each blushing, quivering climax it grows stronger. When they are joined in their romance by Mary Jane Greenstreet, a girl born to both the human and faerie worlds, will the intensity of the foursome’s lovemaking shatter the bonds of earth?

Publisher’s Note: In Need of a Master includes spankings and sexual scenes. If such material offends you, please don’t buy this book.

“Please what, Celestia?” Jonathan asked softly, bending his head close to the long raven hair that smelled of the forest, so that he could murmur in her ear.

Celestia gave a little whimper, and Jonathan sensed, with the new empathy she seemed to have brought him at least where she and Deirdre were concerned, that despite everything she felt the shame of being a whipped girl in a parka and nothing else, her hands held, her cunt open. She had an essential modesty just as great as any girl in upstate New York, and that somehow constituted her secret power: shame and modesty, as manifested in the beauty of the hidden glen, and the space behind the waterfall; innocence, as embodied in the hidden pleasures of a girlish cunt, a rosy clit, a puckered anus.

The social standards, the human laws, of Jonathan’s world had taken this power and dammed it up—as, it seemed from what Deirdre said of the strange place from which the girls had come, they did under the earth. Deirdre’s words made him think, though, that under the earth they dammed the power of girls’ natural needs and natural shame to some greater purpose. Here in upstate New York, they dammed it to create, he supposed, what they would call happy families.

But in Jonathan’s house, he and these magical girls would un-dam it as pleased them, and they would see where their sexual, magical power took them. In Celestia’s begging he heard the same greater purpose that seemed to find him from the very roots of the mountains and of the trees: he didn’t know what the destiny to which his fairy princess had called him would hold, but he felt its rightness in his bones.

And, above all, in his hard, hard cock.

“Please,” Celestia whispered. “Please fuck me, Master. Please… I need your… your root.”

The root. The cock. Celestia must ride this root, came to his mind from somewhere far away and yet very near. He took firm hold of her hips, and thrust himself inside, as she and Deirdre cried out together.

Jonathan tried manfully to stave off his own orgasm, and succeeded at least well enough so that he felt Celestia begin to come beneath him. He had resolved to fuck her as gently as he could, her first time, thinking back to the tenderness that Bobby Sue and Mary Jane had needed when he deflowered them, but Celestia bucked beneath him like a wild animal, her hips riding back and forth even as he rode her, as if she were indeed upon some tree root, making nature magic spring up from the earth. He couldn’t stop himself: he rode hard, and he came, too, Deirdre screaming out one final climax behind them at the sight of the fairy princess fucked for the first time, by her human master.

2018-01-20
Chris
Previous: Rules of the Wild by Jaye Elise and Jack Crosby
Next: Owning Their Pet: A Dark Sci-Fi Romance by Marlee Wray