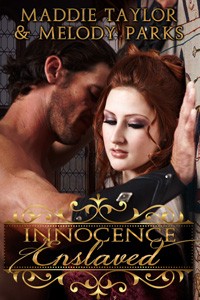 When she is abducted from her village, eighteen-year-old Emilia Selkirk’s world is turned upside down almost instantly. Stripped naked, bound, and placed on the auction block, her fate seems hopeless indeed, until a tall, handsome man speaks up to bid on her. His firm, commanding voice sets her blood on fire even as the kindness of his tone warms her heart, and she dares to hope that the future may not be as grim as she feared.

Corbet Mills, a wealthy merchant, has sworn off love forever. He has seen more than enough cruelty for one lifetime and slave auctions hold no interest for him, but when he sets eyes on Emilia he is captivated. Perhaps it is the quiet defiance evident in her pose or perhaps it is simply the alluring curves of the young redhead’s beautiful, naked form, but something about her calls to him, and he finds he can’t leave her to the cruel intentions of the leering crowd.

Intent on playing the part of the hero and keeping Emilia safe and pure until he can return her to her family, Corbet does his best to resist her allure. He provides for her, cares for her, and guides her, even when that means taking her over his knee and administering a long, hard bare-bottom spanking to correct her behavior. Yet as he struggles to contain his growing desire to claim Emelia as his own, an old enemy takes a deeply unwholesome interest in her. In the midst of intrigue, danger, revenge, and murder, can Corbet protect the woman he has come to love?

He stroked the side of her cheek with the back of his fingers. His tender caress caused more wetness to pool between her nether lips. Giving in to the sensation, she meekly lowered her lashes.

In the same low voice, he droned on. “You are also going to behave and take your spanking like an obedient girl.”

Said with assertion, not posed as a question, she couldn’t have answered anyway, especially when the back of the dress whooshed up without warning, sending a rush of cool air over the warmth of her bare, damp skin. She gasped, heat instantly rushing to her face when his hand came to rest on the center of her bottom. Her estimation proving correct, it was large enough to cover most of both cheeks.

She could hear the scuff of his footsteps as he moved behind her. She tensed. Not given undergarments to wear beneath her dress, he could see all of her now, every wet wicked inch. Slowly, his fingers ran lightly over her already sensitized skin. Her muscles tightened in anticipation and she gripped the edge of the desk tighter.

“Are you ready, Emilia?”

In an instant, a loud crack sounded in the quiet room as his hand came down, colliding crisply with the full curve of one cheek. Another slap from his broad palm quickly followed, landed in like fashion on her other cheek.

“You’ll receive ten with my hand.” Low and determined, his voice was as even as his spanks. “And ten with my belt.”

Four more blows landed each with greater force, creating more heat than the last, and not only on her bottom. A burning ache coiled deep inside her, and the wetness of her arousal that had started as a slow trickle was now running freely down the inside of her thigh. Another four followed, harder still, the swats lower, causing her body to rock and her pelvis to bump against the desk. When he stopped, her body hummed, yearning for more.

Never had she been so aroused, or more embarrassed. She couldn’t imagine why she was reacting so wantonly to a spanking, and didn’t have time to figure it out when the clink of his belt buckle made her breath catch in her throat.

He pushed her dress up further, well above the small of her back, leaving no barrier between her skin and his leather. His hand returned, his fingers gliding over her tingling buttocks, then they moved lower, the tips grazing the soaked flesh of her inner thighs. Dear heaven above!

“You are very wet as the result of my hand, little one.”

Wholly mortified, she couldn’t pretend anymore that he didn’t know. A groan of shame slipped through her lips while her mind cried out for deliverance, by chance, to disappear in a puff of smoke or for the earth to open up and consume her whole. None of that happened. She remained as she was, bared in all her wet glory before the man whose uncompromising authority and masterful touch had made her that way.

2016-02-05
+admin
Previous: Shared by the Barbarians by Emily Tilton
Next: Kept by Her Cowboy Daddy by Dinah McLeod