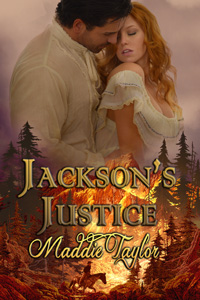 Twenty-year-old Jenny Harper has been in love with Heath Jackson since the day she saw him leap from a galloping horse to save an old woman when she was eleven years old. Over the years, Jenny has watched the women swarm around Heath, but she has her heart set on him and she is not one to give up easily. One way or another, she will show Heath she is a grown woman, ready for a husband, not the child he remembers tagging along after his younger brother.

Unfortunately for Jenny, ever since he was left at the altar by a foolish girl who ran off to marry a wealthy old man, Heath Jackson has sworn off marriage, preferring instead the company of widows and saloon girls. And in any case, though he has secretly lusted after her for years, as far as Heath is concerned Jenny is too young, too much like family, and too eager to wed.

But when tragedy strikes, putting more on Jenny’s shoulders than she can bear, her only hope of saving her family home lies in marrying quickly. Can Heath sit back while other men vie for her affections? Can he bear to watch in silence as she chooses a weakling when she desperately needs a strong man like him, one who will keep her safe and give her the sound discipline she needs when her impulsive ways place her in danger? Or will he stand up and claim what should be his, even if it means risking his heart again?

He walked toward her and hauled her out of her chair. “I’m bullheaded? You are the most stubborn woman I’ve ever met. I think talking right now is a waste of breath.”

He sat down in her vacated chair and to Jenny’s horror, pulled her across his knee.

“You can’t, not here—” She stopped when he flipped up her skirt, the answer to her half-uttered question quite obvious; he could and would, right here.

“I’m speaking with my hand since you aren’t listening effectively with your ears.”

Up went her petticoats. Next, she felt his fingers move over the split in the back of her drawers.

“I like these split drawers, darlin’. They’re very convenient.”

With his tug on the drawstring, the linen easily parted and the cool air in the office brushed across her suddenly bare behind. She found her tongue as the first smack landed. “Heath,” she cried. “Mr. Bennett could come back any minute.”

“You think James Bennett won’t recognize the sound of a wife getting a bare bottom spanking? Like he told you, he’s been married twenty years.”

“I heard everything.” He lit into her then, delivering smack after smack of stinging swats.

Despite the many shelves lined with books, and the heavy carpet and drapes, the sound of her punishment resonated loudly, each spank like a shotgun blast echoing in the Laramie Valley, which rolled on forever, and could be heard for miles. Jenny’s head came up and her eyes shot to the windows. The drapes were open, leaving the glass covered with only insubstantial sheer curtains. Anyone walking by would surely hear, become curious, and peek inside.

“Heath, for pity’s sake, the windows.”

“I’m angry and fresh out of pity. I suggest if you don’t want anyone to be the wiser, that you be quiet.” A flurry of firm slaps to her upper thighs followed, igniting her skin. “This has been building since we left Laramie a week ago.”

“What?” She’d been very mannerly and polite during their travels.

“You get snubbed up worse than any woman I’ve ever seen.” His hand kept up a steady barrage on her backside as he lectured. “I’ve told you I expect honesty. Omitting the truth is the same as a lie. I’m getting tired of you answering my questions with what you think I want to hear or with no answers at all.” The tender skin where her bottom joined with her thighs was paid attention to next, which really stung.

“Heath! Please.” Her breathless plea rose above the din.

“You didn’t tell me you were intimidated by my family’s wealth or that you were still feeling insecure about our marriage. I also know you weren’t forthcoming about what happened that night at your farm with Harper. I know you were afraid I’d kill him and it’s why I let it slide at the time, but never again.” He stopped, rubbing and soothing the burn he’d created on her bottom, but not the burning pain his anger had built inside her.

“I will have honesty between us, Jenny. If I have to swat your naughty behind every day for that to sink in, so be it.” His warning given, he resumed, his hard palm reinforcing the message, the intensity not lessening one bit.

It seemed to go on forever, the fiery heat leaving her breathless and squirming over his lap. After a particularly sharp smack connected with her upper thigh, she forgot about the flimsy curtains, blocked out the risk of passersby overhearing, and cried out.

“I’m sorry, Heath. I promise—” Her vow was interrupted by a yelp as an identical smack landed sharply on her other thigh. “Please, I promise to tell you the truth from here on out.”

He stopped and once again started rubbing. The sting eased, but the burn persisted. “I’m going to hold you to that,” he murmured softly as his hand moved lower to caress her tender thighs. “Or else, in addition to becoming well acquainted with my hand on your backside, you’ll get to know my belt or a paddle real quick. Is that understood?”

2015-01-15
+admin
Previous: Daddy’s Girl Catches Fire on Amazon!
Next: Stolen by Her Master by Emily Tilton