Jungle Dance: Lessons in the Amazon by Erin Ballantyne 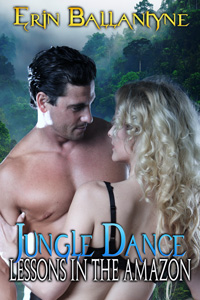 When newlywed Zara’s husband, Richard, orders her to remain in England because his photojournalism assignment in the Amazon rainforest will be too dangerous for her, she secretly buys a plane ticket and beats him to Brazil. Will the monumental spanking that follows her arrival make her question her judgment? Her sore bottom aside, she is ecstatic when Richard relents and allows her to stay.

Upon meeting their tour guide’s daughter, Conchita—a beautiful, flirtatious, and often barely-dressed eighteen-year-old—who is coming along to act as their translator, Zara is quite glad indeed that she disobeyed Richard and came to Brazil. Someone has to keep an eye on her man when girls like that are around…

Richard and Zara navigate the perils of the jungle and capture breathtaking photos even as they journey deeper into their own relationship and grow in love. When a heroic act earns them the respect of a native tribe, they are invited to witness dances and customs never before seen by outsiders. But can Zara keep herself under control when Conchita provokes her one time too many, or will her temper earn her a trip over Richard’s knee in front of everyone?

She squirmed on his lap and turned slightly away before saying, “I, umm, I ordered some gear.”

“You ordered some gear for me?” he asked in amazement.

“Umm, no. For me.” She looked at him now, pleading desperately with her eyes. “I wanted to come, and I thought I could convince you at the last minute, so I ordered gear to have it ready just in case you were to say yes.”

He stared. “But I had told you no. It simply isn’t safe!”

“I know you did,” she said miserably, “but I really, really want to go.” Then her face turned mutinous. “In any case, I’m not a child, and I can decide for myself if something is dangerous or not! I’m tired of your high-handed bossiness!” She got up off his lap.

Richard sighed. He supposed that every marriage reached this point eventually. He had been enjoying the sweetness of being married to Zara and hadn’t wanted to rile her up, so he had let many things slide. But this was a direct challenge to his authority, and she was about to find out the hard way that he would not tolerate defiance. In decidedly measured tones he issued a command. “Go to my office.”

Zara’s mouth went dry, and she stared at her stern-looking husband. “To your office?” she repeated faintly.

“Yes. Now, if you please.” When she still hesitated, he started to rise, looking rather menacing. She took a step back.

“I’m going,” she said hastily, turning away. With slumped shoulders, she walked to his den, not even bothering to turn on the lights. What she had done suddenly seemed very wrong. She stood uncertainly in front of his desk for what seemed like several minutes.

He said, “Sit on that chair and think about what you did and how it might affect our marriage.”

She sat, feeling worried that she had done some irreparable harm to their marriage. With an uneasy feeling in the pit of her stomach, she wondered what he would do. Squaring her shoulders, she looked up to search his face as he stood, hands on hips, looking at her intently.

He finally broke the silence. “Zara, you not only disobeyed me intentionally, you issued a direct challenge to my authority in our marriage. You thought that you could manipulate me into having your way. I love you more than life itself, but I cannot let this go. You would not respect me if I did, and I simply cannot live that way.”

She shrank back in her seat, wishing that she could melt into the carpet.

He sat down in his chair and rolled it back. “Come here.”

Her hands went to her breast, and she shook her head when she fully realized what he intended. “No, Richard, please, no! You can’t!” She looked around wildly, “This is your office, not the bedroom. And… and we have neighbors! What if they heard? I’m sorry! And—”

She stood and stared at him with wide-open eyes. Her feet began to shuffle forward, until she stood at last in front of him, now finding it hard to breathe, her heart thumping.

“Take down your pants.”

Her eyes flew even wider in shock. “But Richard, I… I…” Her voice trailed off, but when he stood up decidedly, her hands went hastily to the front of her jeans. She fumbled with the button and then pushed them down a few inches, pausing to look at his eyes again. They looked so hard that she stepped back in trepidation. With an involuntary gulp, she pushed the jeans past her hips, carefully leaving her panties in place.

He motioned for her to move them down too. She swallowed again, and her thumbs went slowly to the waistband, her eyes never leaving his, hoping against hope that he would change his mind. He nodded, and she pushed inch by inch, revealing her femininity slowly. They had been married for six months, and he had seen her completely nude hundreds of times, but somehow, pushing down those panties made her feel more naked than she had ever been in her life.