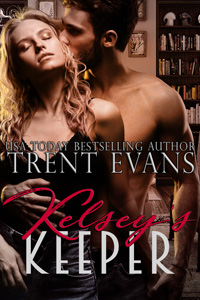 He promised to keep her in line. He kept her as his instead.

His best friend’s twenty-year-old daughter should have been absolutely off-limits for Max Williams, but Kelsey Burke’s flirting and teasing have finally pushed him too far. She’s going to get what she’s been asking for, and it’s not going to be anything like her naïve fantasies.

It will be on his terms, not hers. It will be rough and shameful and it’s going to hurt.

She needs to learn what happens to naughty girls who trifle with a man twice their age.

But it’s going to take more than one lesson…

“Take your pants down, Kelsey.”

He waited for her for a heartbeat, then another, his eyes fixed upon the broadness of her hips, the lushness of her thighs hinted at even in the dark slacks.

Her hands reached back, then hooked into the waistband of the slacks. She wiggled her hips adorably as she worked her pants down, revealing white lace boy shorts.

“Panties too, girl.” His cock was already throbbing, pressing hard against the zipper of his own pants, and yet it almost irritated him. This wasn’t about getting his rocks off. This was about trying to dissuade this silly girl from doing something even dumber than she’d already done.

He just wondered if he had the strength to go through with it.

She whimpered ever so slightly, then drew the lace down as well, fully revealing her ass to him. It was just as beautiful as he thought it would be, broad and pale—but firm, too. It was perfect, really. Like just about every other part of Kelsey’s gorgeous, young figure.

Perhaps that’s what he was? But it wasn’t going to stop him from doing the right thing here, from showing her she was stupid to push this any further. “Now, you listen to me, Kelsey. You’re going to get a spanking, and then you’re going to go home. Got me?”

“Yes… yes, sir.” Both the words and the trembling of her voice had his cock surging again, his urge to touch it, to stroke it while he looked at her ass helplessly before him, almost too much to bear.

He stood at her side, smoothing a hand over her lower back, then down her right buttock, so soft, smooth, and cool to his touch. Then he moved it back up the right side, giving her ass a little squeeze, making her let out a tiny yelp.

He brought his palm down firmly across the center of her left buttock, the slap satisfyingly loud, jarring in the quiet room. Her bottom cheeks clenched for just a split second, then relaxed. But she made no other sound.

That pleased him, seeing that even then, despite her mortification, she was still at least attempting to obey him.

Then he began slapping her ass with a steady, firm rhythm, not giving it to her too hard, but definitely not going easy on her, either. “Have you ever been spanked before, Kelsey?”

Her swallow was audible. “No. Never. You could stop now, right?”

“What would be the point in that, Kelsey? I’m not even close to done with this ass.” He couldn’t help himself, smoothing a palm over his genitals, giving them a firm squeeze as he continued to slap her ass. He concentrated on the firm, slightly chubby overhang of her buttocks, at the tender join where they met the creamy thighs. Cupping his palm, he began smacking her there even harder, loving the way it made her buttocks bounce and wobble with each blow of his palm. Pink was already beginning to suffuse her pale, beautiful flesh. But it didn’t stop him. Quite the opposite, in fact. It actually spurred him on to spank her even harder.

“That’s another thing, Kelsey!” He slapped her ass with a quick flurry of four or five smacks, her entire bottom jiggling and wobbling at the harsh blows. “How many times have I told you to quit calling me that? And yet you still do it. I’m beginning to wonder if you’re doing it on purpose, just to make me mad.”

“No! No—I’m… I just, it’s habit. Ah!” Her hips waved again, and he gripped her waist tightly, holding her still.

“Stay in place, girl. One of the things you need to learn is to be obedient during your punishment. Keep your bottom very still, so that I can properly spank it.”

He slapped her upper thigh then, and she bit off a tight shriek, the ghostly print of his palm going white, and then instantly darkening to pink upon her soft, vulnerable flesh. “You’re damn right you’re going to do what I say. I’ll teach you.”

She had the good sense to keep her mouth shut at that, though she whimpered with almost every blow now. He pressed upon her smooth lower back, loving the way sweat was beginning to bead upon her skin. It was at that moment that he caught the scent—the scent of her arousal.