Kept by Him: A Dark Mafia Arranged Marriage Romance by Measha Stone 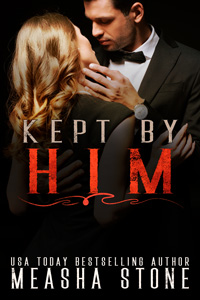 My family took something from the Russian mob. Now they’ve taken something back.

I was given to Micah Ivanov as a bride to keep the peace between the two most powerful mafia dynasties in Chicago. But my future husband doesn’t plan to let this be a marriage in name only.

He’s going to take me to his bed whether I like it or not, starting tonight.

I know he’s going to be rough. I know it’s going to hurt. But that’s not all that scares me…

I’m not just afraid that he’ll make me scream.

I’m terrified that he’ll make me beg for it first.

Publisher’s Note: Kept by Him is a stand-alone novel which is the second book of the Mafia Brides series. It includes spankings and rough, intense sexual scenes. If such material offends you, please don’t buy this book.

Over and over again he peppers my ass with his open hand, not missing an inch. What starts as a blanket of warmth quickly ignites into an ember.

“Micah.” I wiggle from side to side. “You made your point,” I say, shoving my arm back between our bodies and trying to shield myself.

“No reaching back.” He grabs my wrist and pins it to the small of my back. “And my point was made a while ago, this is your punishment. This is the consequence for bad girls who disobey.”

The swats get harder and faster.

“Micah!” I wiggle more, but he only responds easily by maneuvering his leg from beneath me and trapping me between them. I can’t get away, and he’s got my wrist in such a death grip I can’t get free that way either.

“Learn this lesson well, Lena, because if we have to repeat it, you’ll be getting a taste of my belt,” he promises as he increases the spanks once again. I smack the couch cushion in front of me and try to push out of the vise his legs have me in, but it’s for naught. I’m only exhausting myself.

The tears I swore would stay behind closed lids spill down my cheeks.

“Please!” I beg as I try to throw my right hand behind me to stop the spanks if only for a moment. He captures that hand as well and now I have both hands pinned and my legs locked down. I’m completely helpless.

My ass is an inferno from his punishing hand, but he doesn’t let up. Over and over again he spanks, moving his aim even a little lower to the tops of my thighs. But I’m out of fight, I’m out of pride.

I’m crying. Openly crying into the couch, while he continues to spank me like a disobedient brat. I should have stayed in; I should have found something else to do, maybe invited Tanya and Marie over here. Instead, I tried to show him what I thought of his authority.

And now he shows me what it really means.

“It’s over, Lena,” he says between my soft sobs. The couch muffles me enough that maybe I haven’t completely embarrassed myself. The throb in my ass takes up all of my attention. How can I sit down now? I have to be black and blue and swollen.

I wipe the tears from my cheeks and take a slow breath in, hold for three seconds, and release.

“You did pretty good, Lena.” His compliment surprises me and I push away from his chest to look into his eyes. If he’s teasing me, I’ll lose my temper. Where there was sternness before, there’s warmth now.

“I don’t ever want to do that again.” My voice shakes, but it can’t be helped.

He breaks into a smile. “Good, then maybe we won’t have to.” He tilts his head to the side. “Except for fun.”

“Fun?” My brows furrow. “Why would that ever be fun for me?”

His arm wrapped around my torso tightens and his free hand pushes my legs apart. “Don’t fight me now, unless you want to go back over my knee.”

It’s only curiosity that keeps me obedient as he slides his hand up my thigh to my sex. With a featherlike touch, he glides his finger through my folds, flicking my clit as he removes his touch and brings his finger up to my view. My juices have soaked him.

2021-03-07
Chris
Previous: Given to the Daddies by Emily Tilton
Next: Big Dog: A Rough Romance by Delta James