Kept by the Commanders by Maria Monroe 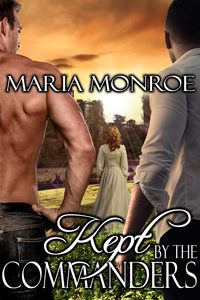 Over the years since a series of catastrophic natural disasters left most of the Earth in ruins, those who survived have returned to a much more primitive way of life. In this harsh world, men fight to protect what remains of humanity while women care for their homes, bear children to rebuild civilization, and obey their husbands or face stern chastisement.

Twenty-year-old Lara has grown used to fending for herself, but when she defies the strict rules of the community she ends up in deep trouble. To avoid banishment, she is informed that she must spend three months as the prisoner of two battle-hardened commanders of the village’s soldiers, during which time she will be required to submit to them in any way they demand.

The commanders intend to ensure that Lara is taught a lesson she will never forget, and soon she is blushing with shame as her bottom is thoroughly punished, both inside and out. Despite her sore backside, however, she finds herself quivering with desire and begging for more when the two handsome, dominant warriors show her all the ways in which a man can enjoy a woman. But when Lara learns of a dire threat to the village, can she convince her men to heed her warnings or will she be forced to take matters into her own hands?

Rex took a step toward Lara, and she fought against her instinct to back up. With his chin, he gestured at one of the chairs in the room. “Bend forward and place your forearms on the chair,” he ordered.

“Yes, sir,” said Rex, and Lara remembered his rule that she should address him in such a manner. Tye hadn’t been insistent at all about that.

“Yes, sir.” She bent the front half of her body over so her arms, from her wrists to her elbows, were against the hard wood of the chair seat.

She felt the leather of his boot on the inside of her left foot, urging her to widen her stance, and she did, glad her face was hidden so the two men couldn’t see how bright red her face surely was. She was completely open and exposed to them, legs spread wide, bottom sticking out, everything right there on display.

“She is perfect.” Rex’s voice was softer than before but with a hint of the gruffness to which she was already accustomed. “That bottom will be quite fun to punish.”

Lara felt his hand caress her right cheek, and she realized with his palm open he could practically cup one entire half of her bottom. Surely it would hurt when he began to spank her. Yet the thought of it made her tingle again, right there between her legs, and the ache began once more.

“And we will make you ours in all ways.” Rex’s fingers began to explore the area between Lara’s cheeks. One finger stopped at her tight bottom hole.

Lara gasped as his finger pressed into her, forcing her opening to stretch to accommodate just the very tip of his large finger. “Ooh,” she squealed and wriggled her butt away, unable to help herself at the uncomfortable invasion.

Slap. Her bottom stung at the same instant a smack rang out, and she realized he’d slapped her bottom. He’d spanked her. Hard.

“You are not to speak or move unless I tell you to.” Rex’s voice was quiet but stern. “Do you understand?”

“We made it clear that your body is ours to punish and to take in any way we desire. If you don’t agree, you are free to choose banishment at any time. But while you are here, you will do as we say.”

“Yes, sir,” she repeated, making sure she was solidly in position, with her forearms on the chair.

“And that means,” he said, stepping closer and putting his finger back in her furrow, “you will not complain now, when I’m touching your tight hole, or later, when my cock is buried all the way inside it.”

2016-11-05
+admin
Previous: The Correction Academy by Samantha Madisen
Next: The Warrior’s Prize by Ava Sinclair